Arsenal came back against the champion, Liverpool, and left him without a record option 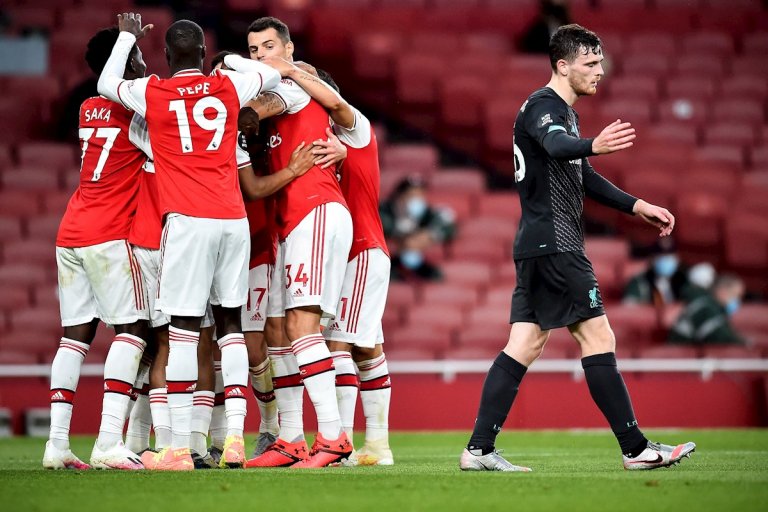 There will be no record of 100 points for Liverpool. The 'Reds' left their remaining chances at the Emirates Stadium, buried by their own mistakes and against a willful and effective Arsenal (2-1).

Two tremendous failures of the Liverpool defense, which Arsenal would have signed without hesitation a few weeks ago, buried the options of some 'Reds' who needed to win the three games they had left to take the record from Manchester City two seasons ago.

But that Liverpool is not the same since they won the title in something palpable. The record was not enough motivation for them to sweep as they did before the break and, against Arsenal, the ups and downs of the team came to light again.

They started well, cornering that changing team that is Arteta's Arsenal, which this time opted for a defense of four, instead of the five it had exhibited on other days, and, without Dani Ceballos in the middle (Arteta's decision) , the 'Gunners' had a hard time generating up.

Liverpool was narrowing the way to goal and found it in a three-cushion combination. It was simple, Robertson dubbed Firmino, he gave it to the Scotsman and put it back, where Mané appeared free of mark to beat Emiliano Martínez.

The Argentine goalkeeper met the first in his network after almost starring in the song of the day a few minutes before. He had gotten involved with the ball and as he went to clear the ball it bounced off Firmino's back and touched the stick.

A scare that became a reality with Mané's goal, but that did not bring down Arsenal.

And not because of Arteta's merits, but because of Van Dijk's inconsistency, who stopped screaming at Robertson to make a mistake that cost him the draw. He entertained himself with the ball, they pressured him, he handed it to Lacazette instead of Alisson and the Frenchman surrounded the Brazilian to score an empty goal.

The errors of Liverpool's defense did not end there. Another loss caused Arsenal's second before the break. Another error taking the ball, another robbery by Lacazette and the same. This time from the young Reiss Nelson, who received it at the penalty spot and coldly crossed it to Alisson.

Alisson encouraged his team to shout "Forget the mistakes" and Liverpool turned in the second half in search of a tie. The clearest were Mohamed Salah, especially in one in which he left David Luiz seated and met a phenomenal Emiliano at the finish line.

The Egyptian was also able to equalize with the head, but Arsenal, who spent 45 minutes waiting behind, got away with it and took the three points from Liverpool to dream of Europe.

Wolverhampton Wanderers' draw against Burnley gives them hope of reaching the Europa League and right now Arsenal are ninth to three points behind Wolves with six to go.

Incidents: Match corresponding to matchday 36 of the Premier League played at the Emirates Stadium in London behind closed doors.