Juventus felt the absence of Cuadrado and could not with Sassuolo 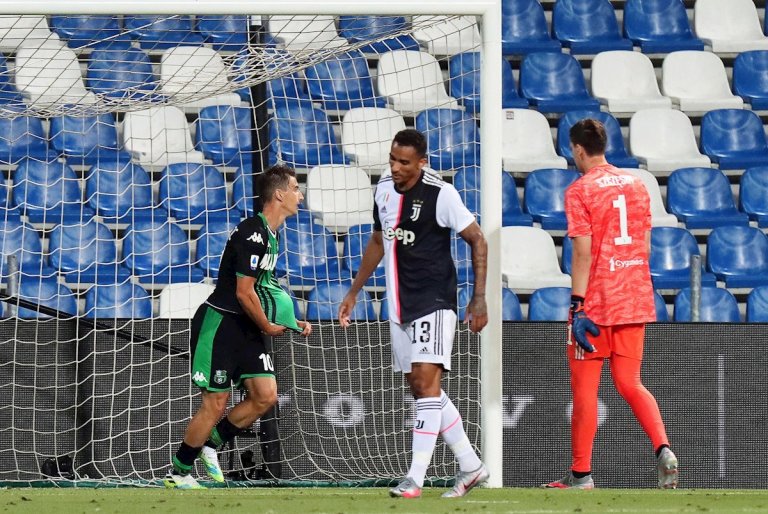 A gray Juventus Turin suffered to draw 3-3 this Wednesday in the Sassuolo field but, despite having three games without knowing the victory, he is only nine points missing in the next five days to be crowned champion of Italy for the ninth consecutive year, too thanks to the irregularity of their rivals, including a Lazio who has not won for four games.

Juventus, which has its worst defensive numbers in the last nine years, with 35 goals conceded and nine in the last three games, has a margin of seven points over Atalanta, second, eight over Lazio, third, and nine over an Inter Milan that can be placed six units from the leadership if it wins this Thursday in the field of bottom Spal.

To be champion, the Juventine team needs to score nine points in the meetings against Lazio, Udinese, Sampdoria, Cagliari and Roma, although the last few days have shown how Maurizio Sarri's men are still far from their best level. In case of parity of points with Inter, Juventus would be champion by having the direct clash in favor.

Some performance problems to be resolved quickly for Juventus, especially in view of the Champions League, in which on August 7 they will have to come back against Lyon in the second leg of the round of 16 after losing 1-0 in France in the going.

This Wednesday at the Mapei Stadium, Juventus was ahead 2-0 after twelve minutes thanks to Brazilian Danilo Luiz and Argentine Gonzalo Higuaín, but again had a serious slump and was traced back to 3-2 by Sassuolo, with goals by Serbian Filip Djuricic, Gaetano Berardi and Francesco Caputo.

He had the merit of avoiding defeat, as he did on the previous day against Atalanta. A set-piece action culminated in a header from Brazilian Álex Sandro that earned a very important point heading into the title.

A Scudetto that is closer also thanks to Lazio's downturn, which has not won for four games. After three consecutive defeats, the Roman team did not go 0-0 at Udinese, whose Argentine midfielder Rodrigo De Paul shot the post in the last minute.

Roma, Sevilla's European rival, smiles in the fight for a place in the next Europa League. The 2-1 victory of the Olympic Stadium in the capital against Hellas Verona, the third in a row for the men of Portuguese Paulo Fonseca, allowed him to shield his fifth position, with four points ahead of Napoli and Milan.

A penalty from Frenchman Jordan Veretout and a goal from Bosnian Edin Dzeko gave Roma an important victory to move almost definitively into the Europa League. Of course, the fourth place, which gives access to the Champions League, is out of reach for Roma.

Napoli, champion of the Italian Cup and rival of Barcelona in the Champions League, which did not go from 1-1 this Wednesday in the Bolonia field in a match in which the Mexican Hirving Lozano started seven months after the last time.

Greek Kostas Manolas put Gennaro Gattuso's team ahead, who left Colombian goalkeeper David Ospina on the bench, but Musa Barrow from Gambian set the final and well-deserved 1-1 for Bologna with ten minutes remaining.

The tie of the Neapolitan box was taken advantage of by an intractable Milan after the health break. He added 17 of the 21 available points and this Wednesday he came back and defeated Parma (3-1), after beating Roma (2-0), Lazio (3-0) and leaders Juventus (4-2) in recent weeks ).

Despite the series of reports about the possible change of coach in the next season, the current coach Stefano Pioli has assembled a competitive team, which plays good football and is close to a ticket to the Europa League.

In the other matches played on Wednesday, Fiorentina beat Lecce 3-1, in a match in which Chilean Erick Pulgar missed a penalty after eleven consecutive hits. His last mistake dated back to January 2018, when he played for Bologna.

Sampdoria's resounding 3-0 victory at home against Cagliari of Argentine Giovanni Simeone, which allowed Claudio Ranieri's men to cherish their permanence in Serie A after living very difficult months.

Colombian Juan Guillermo Cuadrado could not be part of the match due to accumulation of yellow cards.