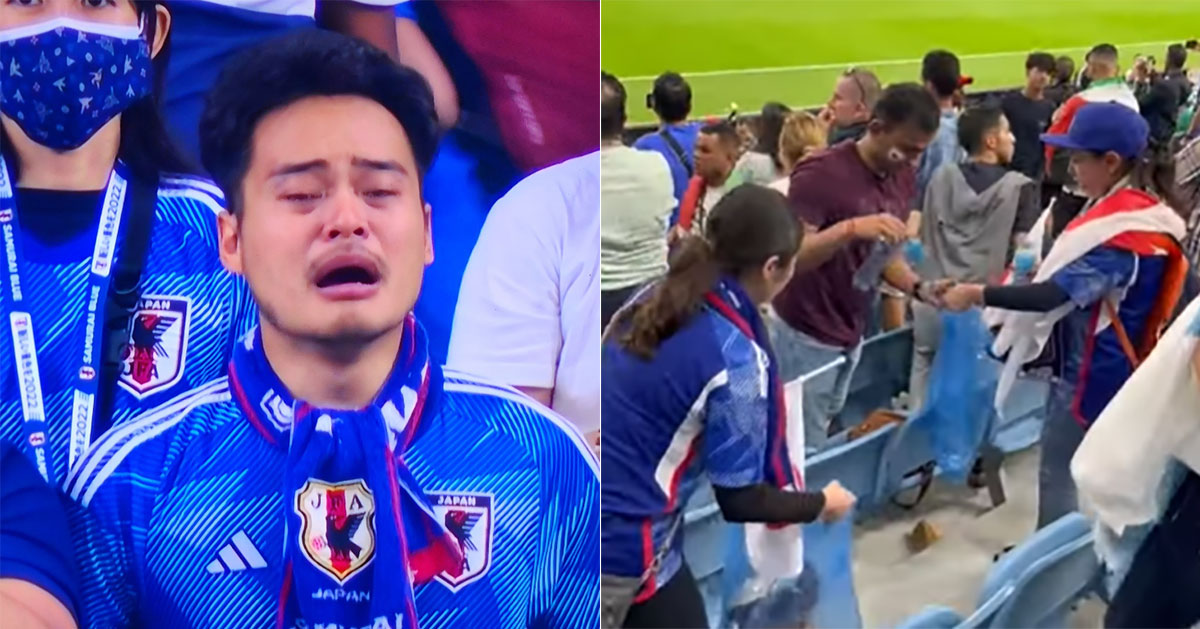 After a 1-1 draw and a loss to Croatia on penalties, Japan was eliminated from the 2022 World Cup (1-3). Japanese fans still clean up Qatar stadium despite losing to Croatia. Japanese supporters were able to immediately move over the dismal outcome and tidy up like they always do.

With the COVID-19 pandemic having passed, which caused havoc on the world sporting scene, this World Cup is being seen as a test case for the resumption and staging of international competitive events. Thankfully, the competition this year hasn't let us down, with lots of surprises both on and off the field.

One surprise joy sticks out as being special among all the others thus far. After their unexpected win over, Japanese fans cleaned up Qatar stadium.

Fans wearing Japanese club shirts and carrying trash bags were seen walking along rows of seats and picking up cans, bottles, and other trash from the stadium floor.

In reality, the Japanese Football Association had given their team's supporters tens of thousands of blue trash bags. Why blue? The goal was to "color" the various stadiums with blue trash bags in honor of the national football team, which goes by the moniker "Samurai Blue" after the color of its uniforms.

Each bag also contained the phrase "thank you" in English, Arabic, and Japanese. Even after games in which their local club did not participate, some Japanese fans cleaned up.

Sadly, the team's loss against Croatia on Monday (Dec 5) put an early stop to Japan's fantastic World Cup 2022 campaign. However, some Japanese fans still clean up Qatar stadium despite losing to Croatia.

This practice was "common for Japanese people to conduct," according to Japanese coach Hajime Moriyasu.

He said, “When you leave a place, you have to leave it cleaner than it was before.”

This act of politeness has drawn a huge response on social media. Many commentators noted that Japanese supporters are known to take similar care of their own stadiums, so much tidying up is not unusual among them. Additionally, they were observed tidying up after the 2018 World Cup in Russia.

What Happens If You Litter In Japan?

In Japan, it is forbidden to litter. You must take all your trash with you when you leave. You are informed that there is a 30,000 yen charge for littering in a Beautification Enforcement Area.

What Culture Is The Most Hygienic?

Japan is renowned as one of the cleanest nations in the world; the population is highly hygienic-conscious and practices healthy behaviors like mouth washing and handwashing.

Why Is Japan So Hygienic?

Because Shinto and Buddhism are deeply ingrained in Japanese religious thought, their sense of hygiene has a deeper significance. Shinto is a religion that has its roots in Japanese culture. Before they pray, Shinto followers do rituals to clean themselves.

Japanese fans still clean up Qatar stadium despite losing to Croatia. Following Japan's World Cup debut last night, images and videos of the Japanese supporters scrubbing the stadium's surfaces appeared online, demonstrating to the world why they are among the best sports fans.

While doing so, other supporters watched the empty field longingly as Japan's World Cup hopes were crushed.