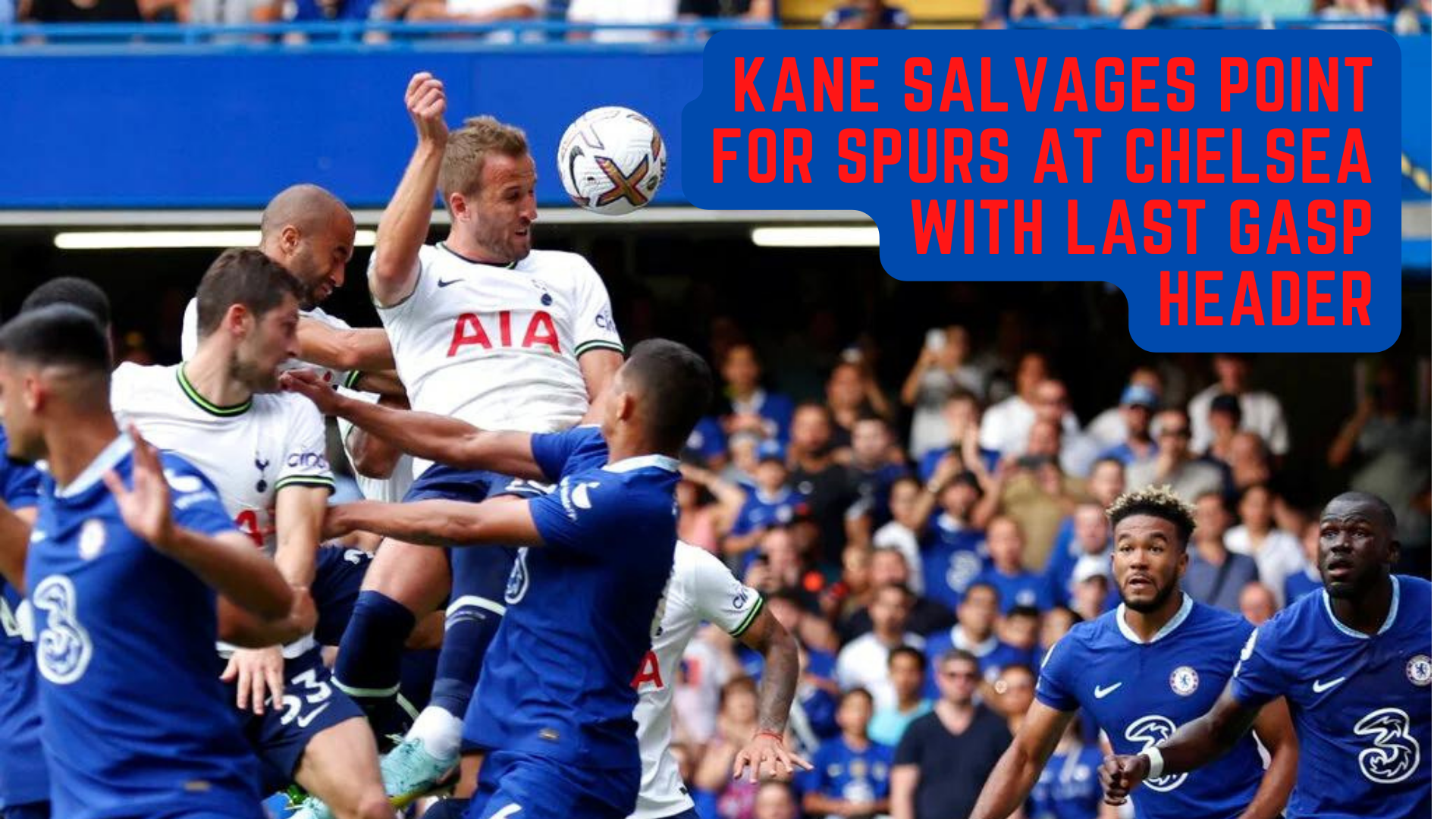 Kane salvages a point for Spurs at Chelsea on Sunday, August 14, 2022, snatching a 96th-minute equalizer to salvage a draw for Tottenham in a tense London derby.

After the final whistle, both managers Antonio Conte and Thomas Tuchel were sent off for their second physical altercation of the game.

Chelsea looked set to kick off a new era at Stamford Bridge with a bang, taking the lead twice through Kalidou Koulibaly and Reece James.

Chelsea which is now unbeaten in eight games against Spurs finds themselves in the seventh spot on the game standings.

Throughout the game, tempers flared as Chelsea twice took the lead before Kane's glancing header gave Spurs a point seconds before the end.

In the sixth minute of stoppage time, Kane glanced home Ivan Perisic's corner to salvage a point, who have now won only once in their last 38 visits to Stamford.

It caused chaos on the touchline, where Chelsea manager Thomas Tuchel and Tottenham manager Antonio Conte clashed for the second time.

After Pierre-Emile Hojbjerg equalized for Tottenham in the 68th minute, Reece James appeared to have sealed the points for the dominant hosts with a 77th-minute strike.

Chelsea's centre-back Kalidou Koulibaly made his home debut in style, volleying home from a corner in the 19th minute, as the hosts dominated the first period.

Chelsea squandered several chances to extend their lead, with Raheem Sterling blazing one over, and it was easy to understand Tuchel's annoyance when Hojbjerg equalized.

Tuchel screamed at the referee, claiming Kai Havertz was fouled in the build-up and Richarlison was in an offside position. He also collided with Conte, earning them both yellow cards.

Havertz missed a glorious chance to put Chelsea back in front, but the hosts regained the lead when the excellent James fired past Hugo Lloris from a pass by Raheem Sterling, with Tuchel joyfully racing down the touchline in celebration.

Tuchel and Conte lost their cool after an aggressive handshake and were forced to separate by their coaches.

Chelsea and Tottenham Hotspur, who finished third and fourth, respectively, have four points from two games.

Tottenham came out confident but was second best for the majority of the game after allowing Koulibaly free reign in the penalty area to volley superbly past Lloris. 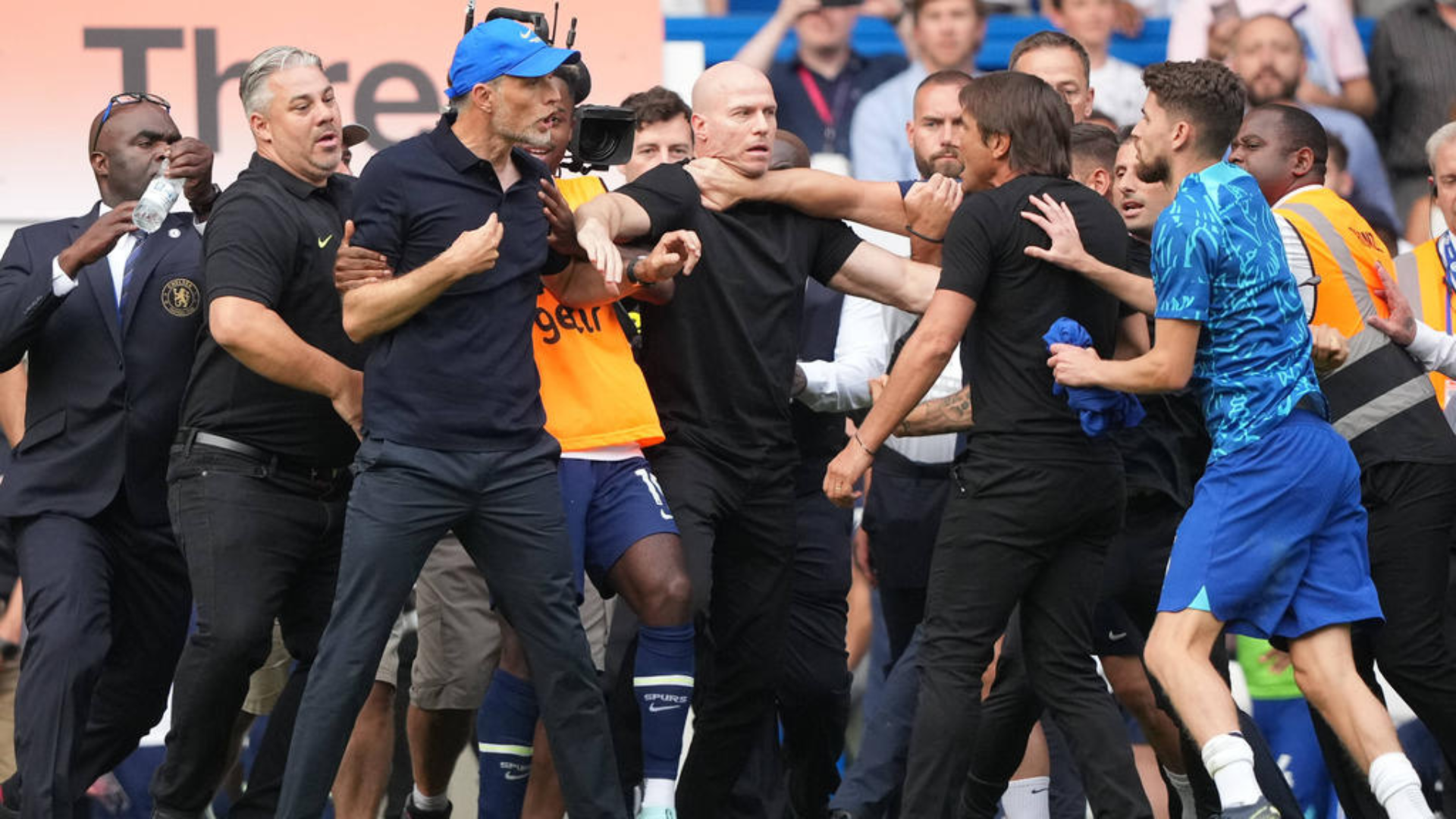 Soccer team managers along with other men having some commotion

Chelsea dominated the first half and deserved their 19th-minute lead, which came from a combination of their two summer signings, Kalidou Koulibaly flashing home a powerful volley from Marc Cucurella's corner.

Chelsea was enraged that referee Anthony Taylor did not penalize Rodrigo Bentancur for a challenge on Kai Havertz, resulting in a melee between the two managers that ended with both Tuchel and Conte receiving cards.

Chelsea went back in front after the order was restored when James scored from Raheem Sterling's pass, with Tuchel celebrating by sprinting past Conte along the touchline.

Chelsea thought they had made it six points from two games until Kane headed in Ivan Perisic's corner - the hostility not ending there as a handshake between Tuchel and Conte devolved into another spat that will undoubtedly be investigated further. 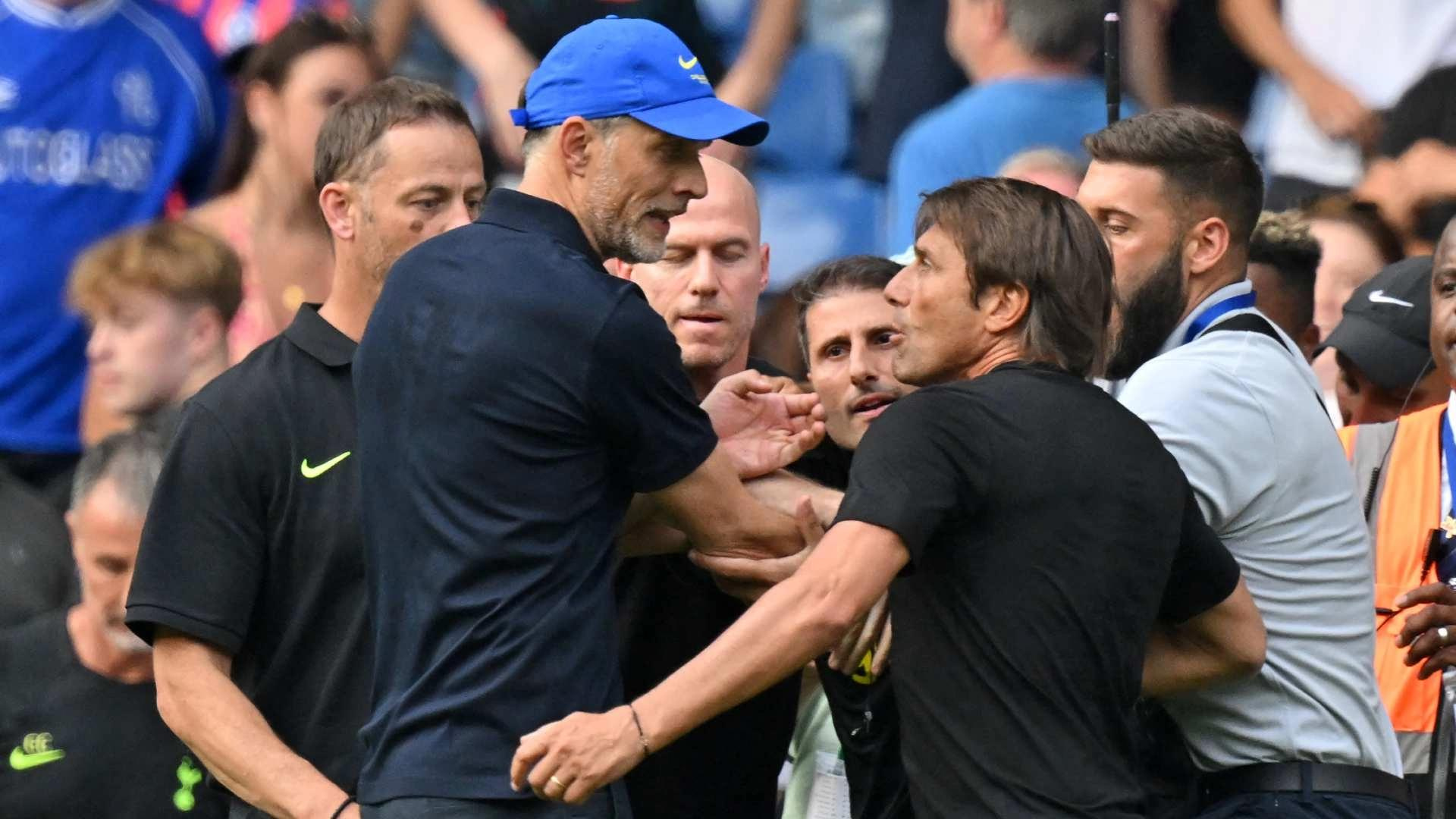 Conte resisted the temptation to start any of his six new signings, but it wasn't until Richarlison came on just before the hour mark and a formation change that Tottenham began to threaten.

Kane had a glorious chance to equalize when he dragged wide with only Edouard Mendy to beat. Spurs scored a controversial equalizer 22 minutes from time, igniting a feud between the two managers.

Rodrigo Bentancur appeared to have clearly fouled Kai Havertz before Tottenham broke forward, and the ball eventually fell to Hojbjerg, who fired low and hard past Mendy. Tuchel was enraged by the decision and Conte's overzealous celebration.

The German retaliated by sprinting down the touchline after James thrashed home Sterling's pass to restore Chelsea's lead 13 minutes from time.

Kane, on the other hand, had the final say when he flicked in Ivan Perisic's corner deep into added time. Earlier, Nottingham Forest defeated West Ham 1-0 in their first Premier League home game in 23 years.

"We were never going to treat it as a normal game, it was more than that," said Forest manager Steve Cooper. "You could sense since we got promoted everyone was waiting for the first home game."

The two-time European champions have made 14 new signings in order to keep their top-flight status, and two of those making their home debuts were the stars, with Taiwo Awoniyi scoring the only goal and Dean Henderson saving Declan Rice's penalty.

Tottenham, who started the season optimistically, would have had few complaints if they had gone home empty-handed, but Kane's late intervention means they have the same four points as Chelsea after two games. Tottenham has only won once in 38 visits to Stamford Bridge in all competitions.

Both London clubs now have four points, with Tottenham in fourth place due to a better goal difference. Chelsea is seventh in the standings after going undefeated in eight games against Spurs.