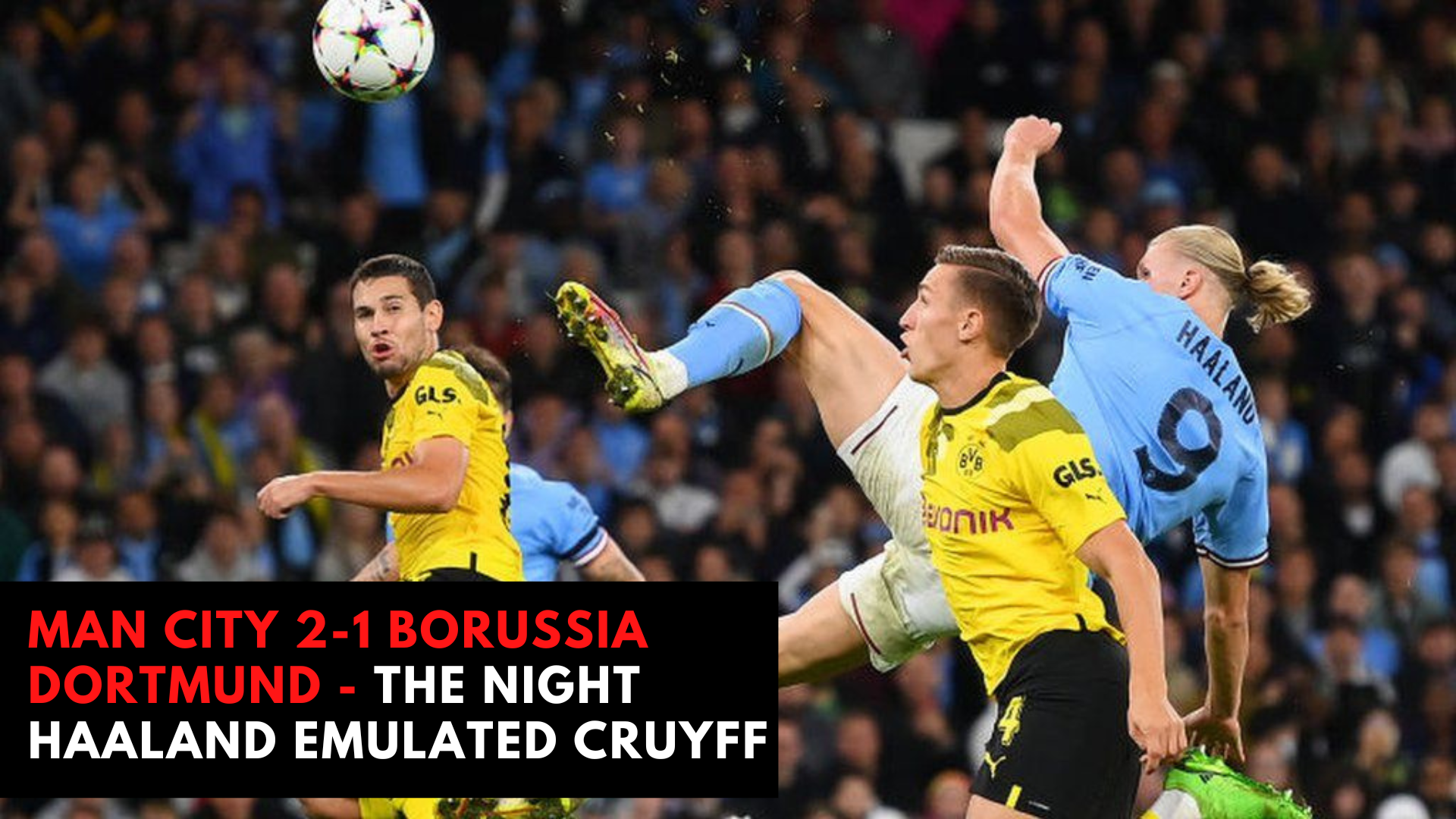 Man City 2-1 Borussia Dortmund game result in the Champions League, as Erling Haaland scored yet another goal for the winner.

The duo in last season's quarter-finals, with Manchester City winning both legs 2-1, though Erling Haaland and Manuel Akanji have since switched allegiances.

Manchester City had the vast majority of possession in the first 45 minutes at the Etihad, but they failed to properly threaten the Dortmund goal, with the Germans seemingly setting up to frustrate the hosts.

City struggled against a composed Dortmund, who took the lead after 56 minutes when the outstanding Jude Bellingham glanced home Marco Reus' cross.

It was inevitable that Haaland would produce a truly special moment four minutes later, flying through the air and scoring from Joao's cross.

Erling Haaland gave two outstanding post-match interviews following his match against Dortmund with a result of Man City 2-1 Borussia Dortmund in the League.

On Wednesday, September 14, 2022, Haaland scored the game-winning goal for Manchester City against his old team in the Champions League.

And, following his incredible acrobatic goal at the Etihad, he delivered not one, but two brilliant post-match interviews. "They did not deter me. I was successful."

When it was pointed out to Erling Haaland after Manchester City's Champions League victory over Borussia Dortmund on Wednesday night that the German side had defended particularly well against him, he responded in typical brusque fashion.

Dortmund had kept their former star quiet for more than 80 minutes. He had the fewest touches in the game, with only 26. However, this did not prevent him from having the final say.

Even by the young forward's increasingly lofty standards, his victory here was particularly impressive. The assist, a sumptuous outside of the boot cross from Joao Cancelo, was sufficient.

Haaland's finish, in which he threw himself across the ball and acrobatically volleyed it left-footed across goalkeeper Alex Meyer, was arguably the best of his 13 goals in nine games for Man City so far.

Cruyff leaped into the air outside the far post against Atletico Madrid in 1973, diverting a cross into the net from a remarkably acute angle with the outside of his right heel at chest height.

The phantom goal is one of the Dutchman's most famous goals and one that Guardiola believes Haaland perfectly replicated. He stated,

"What a goal, I remember a long time ago in Barcelona Johan Cruyff scored one quite similar against Atletico Madrid. It's nice Erling emulated Johan Cruyff."

On a night when City appeared to be heading for a defeat, it was yet another reminder of their number nine's game-changing abilities. 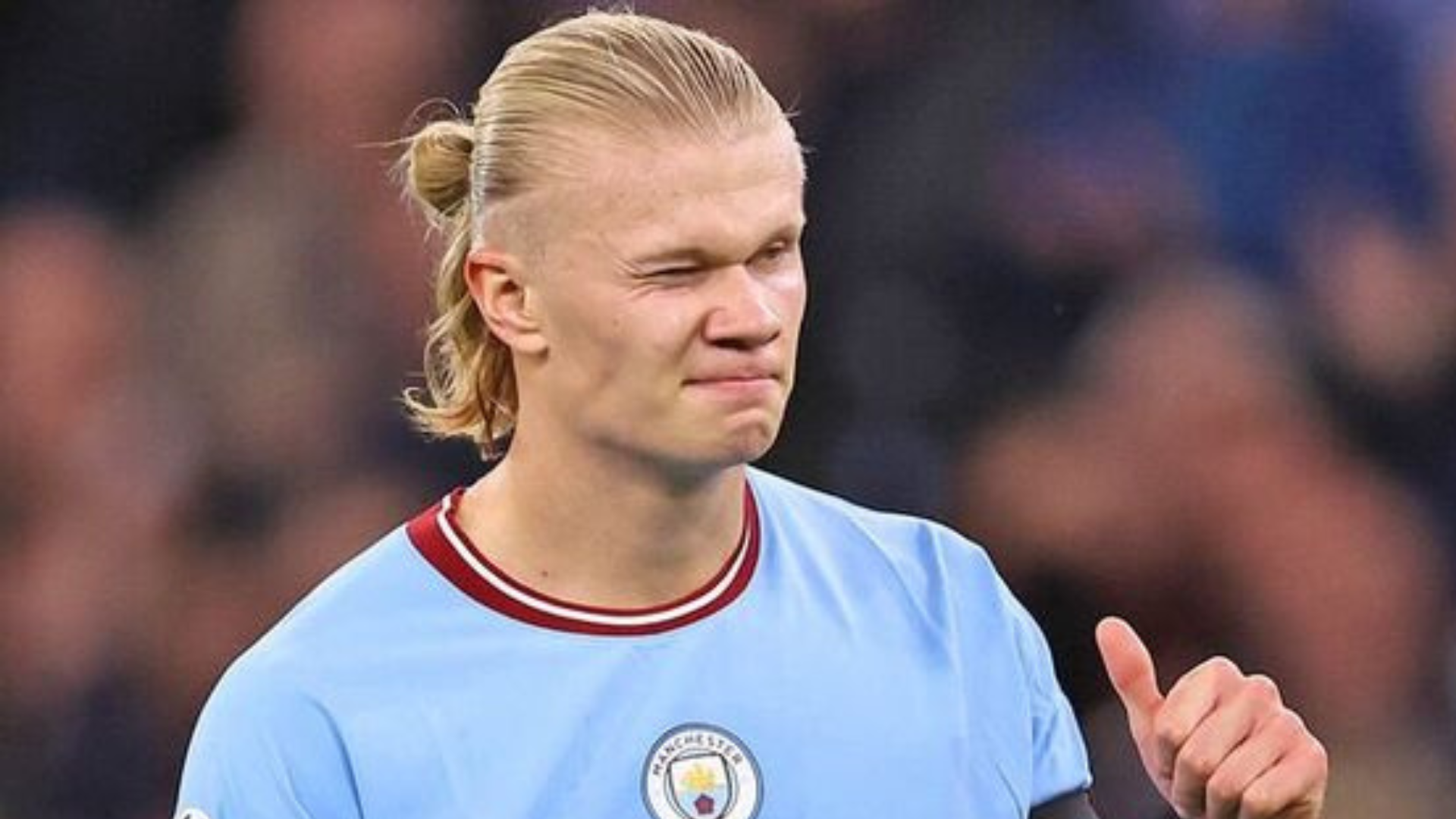 Haaland winking his eyes while doing a thumbs up hand gesture

Haaland had been kept relatively quiet by his former Dortmund teammates, but he still made the defining, spectacular contribution as City came from behind to win.

The young Norwegian was on the sidelines but had sent a warning shot that hit the outside of the post minutes before scoring.

Stones' equalizer, struck with plenty of force but met with little resistance from the strangely static keeper Meyer, shifted the focus of a game in which Dortmund's calm defense, marshaled by the veteran Mats Hummels and with Bellingham pulling the strings in midfield, frustrated City.

When Haaland took off into the air to meet Cancelo's cross with his outstretched left foot and divert the ball past a stunned Meyer, City suddenly sensed a winner.

It brought a wide grin to the face of his father, former City midfielder Alf-Inge, who was watching from the stands. He recreated the scene, albeit without his son's elasticity and elegance.

City fans rejoiced because this was exactly the type of moment for which the 22-year-old was signed: to decide big Champions League games that appeared to be slipping away from them.

It means that City has a maximum return from two games and a striker that every team in the competition fears. 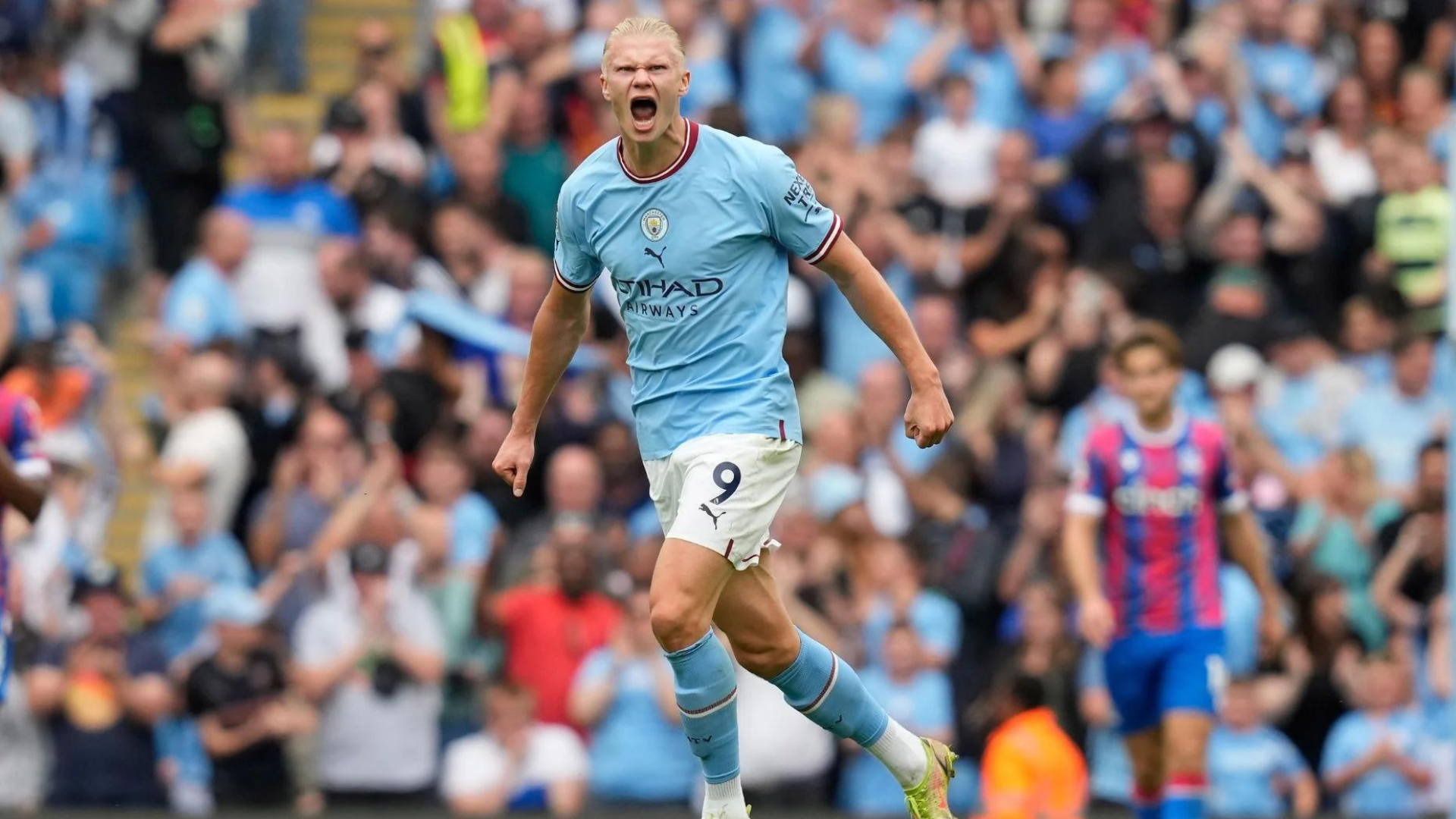 Haaland shouting while running in the football field

Haaland, making his first appearance against Dortmund since joining City for £51 million in the summer, somehow connected with Joao Cancelo's outside-of-the-foot cross, directing an unstoppable finish past Meyer.

"What I love about him is a lot of strikers would panic when they aren't getting much of the ball. He is calm and just thinks, I want goals. It is all about the end product and winning games for Haaland.

"Only certain players can go into a winning dressing room and fit in seamlessly, there has to be arrogance and confidence. He is delivering so much.

"He [Guardiola] isn't trying to compare them [Cruyff and Haaland] as players but they are players who come up with moments. Only he was going to score that goal tonight."

Dion Dublin, the former Aston Villa striker, said on BBC Radio 5 Live: "Any other player would've tried to strike it with their right foot on the volley, but Haaland's gone with the left foot.

It's hard to describe. He's got to be at least eight feet in the air when he connects with the ball, it's an amazing finish.

"He's gone with the correct foot obviously because it's gone in the back of the net! He's a left-footer and many times, you will do things in an unorthodox way with your good foot which makes it look really difficult, but you're more comfortable because it's your good foot.

"Man City were below par, but even so, they got over the line. Two very, very good goals. Stones' goal was 22 yards out, what a strike that was.

"And then you've got Haaland. I don't know what he's thinking, finishing with the wrong side of the foot in mid-air. Absolutely outstanding finish."

Dortmund's defeat was difficult to accept after taking the lead through the outstanding Jude Bellingham and holding Haaland for so long.

"It was not one of those games where you can get on the ball and have loads of possession," said Bellingham afterward. "We knew we'd spend the majority of the game without the ball.

"We were brilliant for 75 minutes but that's enough time for City to put you away. That's what great teams can do. You don't give them a sniff and out of nothing they score and tilt the game back in their favor."

To sum it up, Haaland's acrobatic volley with the outside of his left foot completed Manchester City's late comeback against Borussia Dortmund - the German club he left in the offseason, with the score of Man City 2-1 Borussia Dortmund.

Haaland's incredible finish stunned city supporters on social media. It had to be Erling Haaland, who has now become the latest player to return to haunt a former club, following in the footsteps of Ronaldo and Lampard.