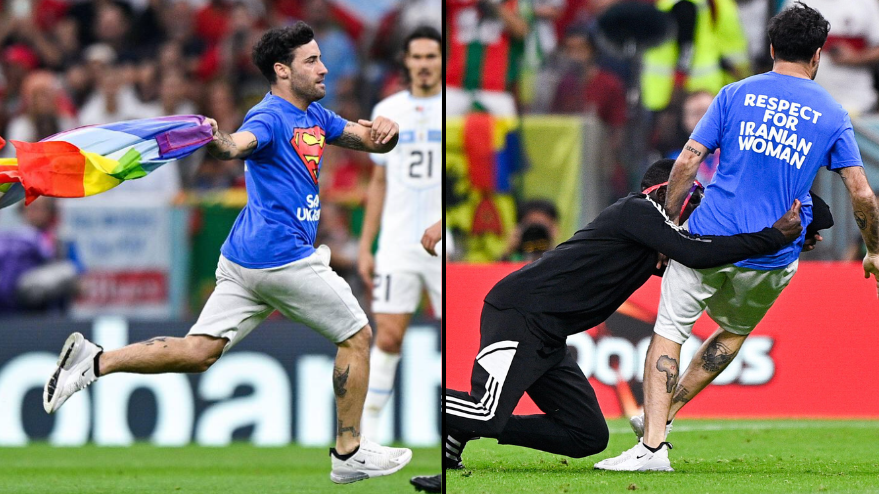 While waving a rainbow flag, a man invades pitch during world cup match. Even before the first ball was kicked, there have been multiple questions raised about this World Cup and its organization.

In the run-up to the first World Cup to be held in the Middle East, tensions flared over Qatar's laws against LGBTQ people as well as the country's treatment of those individuals.

Qatar has made it clear that everyone, including LGBTQ fans, are welcome in the country, but that visitors are expected to respect the culture of Qatar.

During the group stage of the competition, there was a lot of attention focused on Iran. In a show of protest following the death of Mahsa Amini on September 16, who had been detained by the country's morality police, the players for the country chose not to sing their national anthem prior to their first match.

And now, a man has staged a brazen public protest against both Iran, Qatar, and Russia during the World Cup Group H match between Portugal and Uruguay.

When a man ran onto the field during the second half, play was stopped for approximately five minutes because he was waving an LGBTIQ+ pride flag and wearing a shirt with a number of slogans designed to draw attention to two major problems facing the world at the time.

On the back of the man's shirt was the phrase "Respect Iranian Women," and on the front of his shirt was the Superman logo, with the words "Save Ukraine" written below it.

Mario Ferri, a former professional footballer, has been identified as the person who invaded the playing field by the Italian daily paper Corriere della Sera.

The official FIFA feed attempted to avoid showing the man as he evaded security officers by darting away from them, but he was still visible in some shots as he gave them the runaround in a Benny Hill-style manner.

Ferri picked up the pride flag after it had fallen to the ground at one point and then continued running away.

It was left up to Iranian referee Alireza Faghani to retrieve it when he was finally led away through a tunnel after the situation had been resolved.

Craig Foster, a former player for the Socceroos who is now a commentator and an advocate for human rights, praised the former footballer for his demonstration.

Ferri then went on to outline those 'important messages,' making references to the predicament of Iranian women, the contentious stance that Qatar 2022 is taking towards the support of LGBTQ+ individuals, and the Russian invasion of Ukraine.

'1) A message for Iran where I have friends who are suffering, where women are not respected... THE WORLD MUST CHANGE, we can do it together with STRONG gestures, that come from the heart, WITH COURAGE.

'2) FIFA banned rainbow captains bands and human rights flags on the stands, they blocked everyone, BUT NOT ME, like a Robinhood 2.0 I brought the message of the PEOPLE. We want a free world that laughs f***s all races and all the ideas.

'3) SAVE THE UKRAINE. I spent a month at the war in Kiev as a volunteer and saw how much that people were suffering. WE WANT PEACE UK️ IN UKRAINE, GLORY TO UKRAINE.

Thank you for all the messages of love that I receive from the world, from Iran and Ukraine. Breaking the rules if done for a good cause is NEVER A CRIME.

Ferri's Instagram Stories show him in Qatar ahead of Portugal's match against Uruguay; later, he shared footage from the stands during the game, zooming in on Cristiano Ronaldo with the caption 'eccolo il mio dio,' which translates as 'here is my god.'

Ferri has a history of pitch invasions, having entered the pitch during Belgium's World Cup knockout match against the United States in 2014, wearing his Superman T-shirt but with the words 'Save Favelas Children' on it.

He also made an appearance when Napoli played Juventus in 2017, with his Instagram referencing the time he threw a scarf in the face of Argentina striker Gonzalo Higuain.

In regards with his latest issue, Ferri is said NOT to be subjected to any legal repercussions because of his actions.