Manchester United VS Leeds And Chelsea VS Liverpool Are Postponed 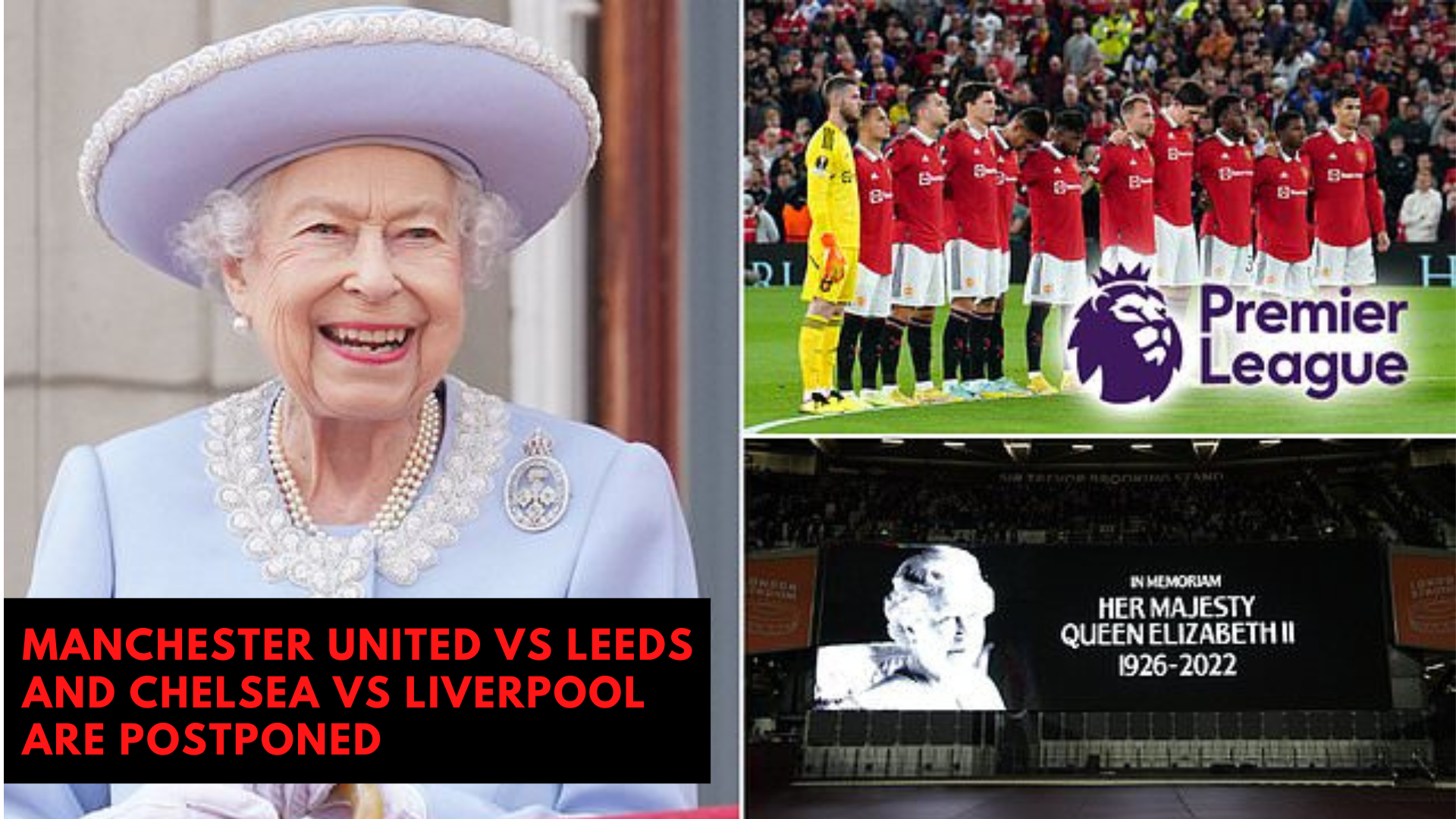 The Premier League will resume this weekend but Manchester United vs Leeds and Chelsea vs Liverpool have been postponed as police resources have been stretched in the wake of Queen Elizabeth's death.

All Premier League games have been postponed for the weekend of September 10-11, as English football enters a cooling-off period following Queen Elizabeth II's death on Thursday, September 8, 2022.

Two of the weekend's most important Premier League games have been canceled due to policing issues related to the Queen's funeral.

Manchester United's home game against Leeds and Liverpool's visit to Chelsea, as well as Arsenal's Europa League tie against PSV, will be played at a later date.

The other seven Premier League games scheduled to begin on Friday will go ahead, with the exception of Brighton vs. Crystal Palace, which was postponed last week for unrelated reasons.

According to the Guardian, the Football League is confident that most of its weekend games will be played after receiving assurances about policing levels at its games.

The Premier League said in a statement that after extensive consultations with clubs, police, local Safety Advisory Groups, and other relevant authorities, it had no choice but to postpone three fixtures.

Two matches have also had their kick-off times shifted, with Brentford vs. Arsenal moving to noon and Everton vs. West Ham moving to 2.15 p.m.

However, Uefa said it had no choice but to cancel Arsenal v PSV due to "severe limitations on police resources and organizational issues related to the ongoing events surrounding Her Majesty Queen Elizabeth II's national mourning."

Another factor in the decision, it is understood, was that the fixture was deemed riskier due to the number of PSV fans traveling and their reputation. 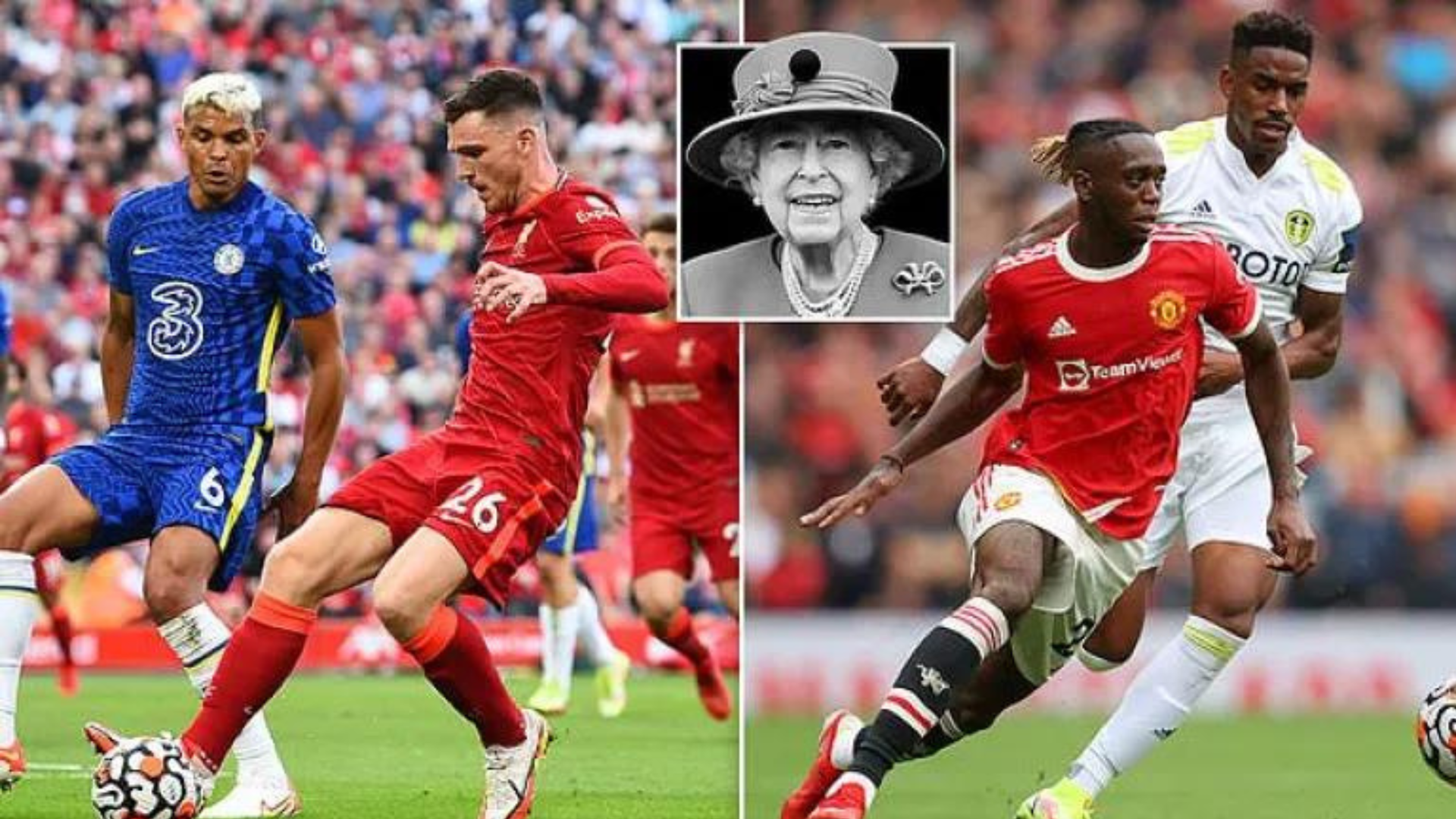 Group of men playing football with queen elizabeth in the middle

"Following extensive consultation with clubs, police, local Safety Advisory Groups, and other relevant authorities, there was no other option but to postpone the three fixtures.

"The Premier League would like to thank the UK Football Policing Unit and other police forces across the country, as well as our broadcast partners, for their support during this process, and will continue to liaise with them ahead of the weekend.

"For the matches being played during the period of National Mourning, tributes will be paid to The Queen at Premier League stadiums. New dates for the postponed matches will be announced in due course."

Arsenal's Europa League group stage match against PSV Eindhoven has been rescheduled for Thursday, September 8, 2022, at the Emirates.

UEFA confirmed that the game will be rescheduled due to a lack of available police in London during the UK's mourning period for Queen Elizabeth II.

It is not yet known when the game will be played, but Arsenal says they "are working with the authorities to reschedule the match".

"UEFA today announced that the UEFA Europa League tie between Arsenal FC and PSV Eindhoven, originally to be played on Thursday 15 September, has been postponed with a new date to be communicated in due course."

"This is due to the severe limitations on police resources and organizational issues related to the ongoing events surrounding the national mourning for Her Majesty Queen Elizabeth II."

The Premier League did not announce any new dates, and a Uefa spokesman confirmed that the Arsenal-PSV game had yet to be rescheduled.

Arsenal, on the other hand, expects either their Premier League game against Manchester City on October 19 or their Carabao Cup tie against Brighton in early November to be moved to accommodate the fixture.

The EFL confirmed that its midweek fixture schedule would resume as scheduled on Tuesday, with tributes to the Queen to be paid.

“A minute’s silence will be held before matches, with black armbands to be worn by participants, flags to be flown at half-mast and the national anthem to be played in stadiums,”.

The Football Association stated that all levels of football could now resume, but that all matches scheduled for next Monday would be postponed.

Following The Queen's death, the EFL program will resume on Tuesday, September 13. The National League has confirmed that matches will resume on Monday, with a one-minute silence observed at all matches prior to the funeral and players wearing black armbands.

In conclusion, the two matches, Manchester United VS Leeds And Chelsea VS Liverpool which would have required a large police presence, has been postponed.

With an international break and the World Cup looming in an already packed schedule, a new date for each match is still being worked out.

All football matches in the United Kingdom were postponed last weekend as a mark of respect following the death of the 96-year-old queen. However, the EFL announced that its entire schedule for this week will go ahead as planned.