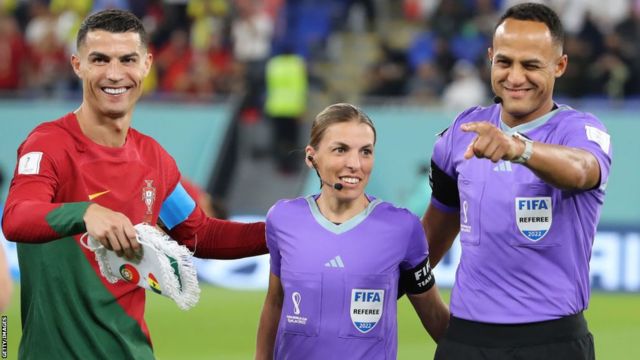 It is the first time that an all-female on-field referee team to preside over the men's tournament.

The match between Costa Rica and Germany in the group stage of the World Cup on Thursday will mark the first time that an all-female on-field refereeing team will officiate a men's match at the tournament.

The First Woman To Referee At A Men's World Cup

In the history of the men's World Cup, Stephanie Frappart will make history as the first female referee.

When she was appointed as the fourth official for the match between Mexico and Poland on the previous Tuesday, the Frenchwoman made history by becoming the first female official to work at the tournament.

We know the pressure. But I think we will not change ourselves. Be calm, focused, concentrate, and don't think too much about the media and everything, just be focused on the field.

Frappart will be joined by assistant referees, Brazil's Neuza Back and Mexican Karen Diaz Medina, at Al Bayt Stadium on Thursday.

She was sked if she ever has comments from players, managers or fans due to being a woman, Frappart said:

Barriers To Female Officials In Sports

There have been significant challenges to the traditional idea of specific gender roles within society over the last twenty years.

The evolution of the feminist perspective, as well as increased awareness of women's rights, has resulted in significant progress and societal breakthroughs for women worldwide.

Despite progress, there are still barriers that limit female referees in the sporting community.

These barriers remain significant, but with intentional interactions and deliberate actions, gender barriers can be broken down in order to create a positive and inclusive environment for all gender identities.

When investigating the reasons for the lack of female referees in the sporting community, it is critical to consider the major barriers and societal obstacles that prevent women from entering the profession.

These barriers have a negative impact on the recruitment of women in officiating and must be addressed if equal representation in the profession is to be achieved.

Sexism, a lack of female recruitment for the profession, and negative stereotypes perpetuated by spectators are some of the barriers.

This unwavering hostility toward women has serious consequences for females in positions of power and greatly harms the official's overall well-being.

Another factor contributing to the lack of female referees in society is cultural gender roles. Recruitment strategies for referee positions are geared toward male audiences, which contributes to the low number of female referees.

Much of the sporting community believes that women are incapable of being successful and efficient referees in their respective sports simply because of their gender.

Former female officials, according to a 2014 study, report a lack of perceived respect from male counterparts, inequitable policies, a lack of female role modeling, and an increased level of gendered abuse when compared to their male counterparts.

Every day that female referees go to work, their gender, sexuality, and overall qualifications for the position are attacked and questioned by those in their immediate surroundings.

When female referees make an honest mistake in officiating, these consistent attacks on gender identity are especially prevalent.

During unusual situations, female referees claim that their gender identity is belittled and attacked, and some of the comments heard border on sexual harassment.

Female referees face multiple levels of crowd harassment that their male counterparts will never face in the professional realm.

In the year 2020, Frappart made history by becoming the first woman to officiate a match in the men's Champions League.

There will be a total of 36 officials in charge of the games being held in Qatar. Among those officials are three women: Yoshimi Yamashita of Japan, Salima Mukansanga of Rwanda, and Frappart of France.