Rafael Nadal Was Eliminated From The Australian Open 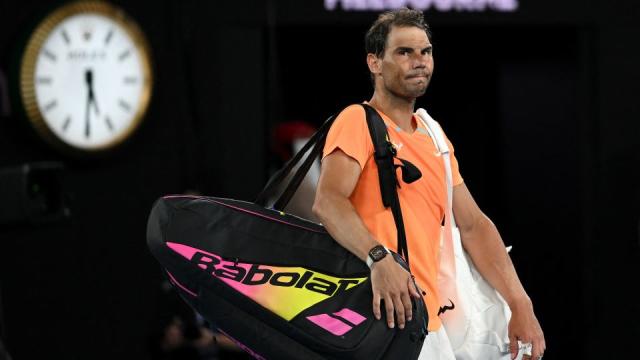 Throughout the match, the 36-year-old Nadal had difficulty moving his left hip because of an injury, and he required treatment while playing the second set on Rod Laver Arena.

He was able to complete the match, but ultimately lost to McDonald in two hours and 32 minutes, marking his earliest exit from a major tournament since the 2016 Australian Open. McDonald won the match.

I didn’t want to retire [as] the defending champion here. I didn’t want to leave the court with a retirement. It’s better like this at the end. I lost, nothing to say, congratulate [my] opponent. That’s the sport at the same time – just try your best until the end.

When the match first began, McDonald got off to a flying start by breaking Nadal's serve in the very first game. After that, he repeated his performance in the second set, assuming command of the match with his consistent and powerful hitting from the baseline.

At the Australian Open, where he was attempting to add to his men's record of 22 grand slam titles, Rafael Nadal had to leave the court for a medical timeout when he was leading the second set 5-3.

In spite of the fact that the Spaniard was obviously having trouble with his movement throughout the third set, he managed to hold serve until the score was tied 5-5. But then McDonald got the upper hand, and he secured the crucial break by shooting a backhand pass while both players were coming towards the net.

The match was won by the 27-year-old player in the following game when Nadal made a backhand return that went into the net. This was the most significant victory of his professional career.

McDonald, who was not seeded for the competition, now has a chance to match his best-ever run at a grand slam if he is able to advance past the third round and defeat either Dalibor Svrcina or Yoshihito Nishioka.

McDonald said in his on-court interview:

He [Nadal] is an incredible champion. He’s never going to give up, regardless of the situation, so even closing it out against a top guy like that is always tough. I was trying to stay so focused on what I was doing. He kind of got me out of the rhythm with that but I’m happy I kept focusing on myself in the end and got through.

Rafael Nadal Parera is a professional tennis player from Spain. The Association of Tennis Professionals has him ranked world No. 2 in singles (ATP). He has held the world No. 1 ranking for 209 weeks and has been the year-end No. 1 five times.

Nadal has an all-time Grand Slam men's singles record of 22 titles, including a record 14 French Open titles. He has 92 ATP singles titles, including 36 Masters titles, 63 of which he has won on clay courts. Nadal is one of only two men in history to have achieved the Career Golden Slam in singles. His 81 consecutive clay-court victories are the longest in the Open Era.

For more than a decade, Nadal has dominated men's tennis as part of the Big Three, which includes Roger Federer and Novak Djokovic and is considered by some to be the three most successful male tennis players of all time.

Nadal was one of the most successful teenagers in ATP Tour history at the start of his professional career, reaching the world No. 2 ranking and winning 16 titles before the age of 20, including his first French Open and six Masters events.

Nadal achieved world No. 1 status for the first time in 2008, when he defeated Federer in a historic Wimbledon final, his first major victory away from clay. He followed up his victory with an Olympic singles gold medal in Beijing in 2008.

After defeating Djokovic in the 2010 US Open final, Nadal, then 24, became the Open Era's youngest man to complete the Career Grand Slam, as well as the first man to win majors on three different surfaces (hard, grass, and clay) in the same year (Surface Slam).

After the match, Nadal stated that he would seek medical attention in order to determine the precise nature of the injury as well as its severity.

Nadal added in a statement:

It’s difficult to make a resolution if it’s a muscle, if it’s the joint, if it’s the cartilage … Let’s see how the injury is, and then let’s see how I can manage to follow the calendar,” he told reporters.