World Cup Soundtrack Singer Maluma Walked Out Of An Interview 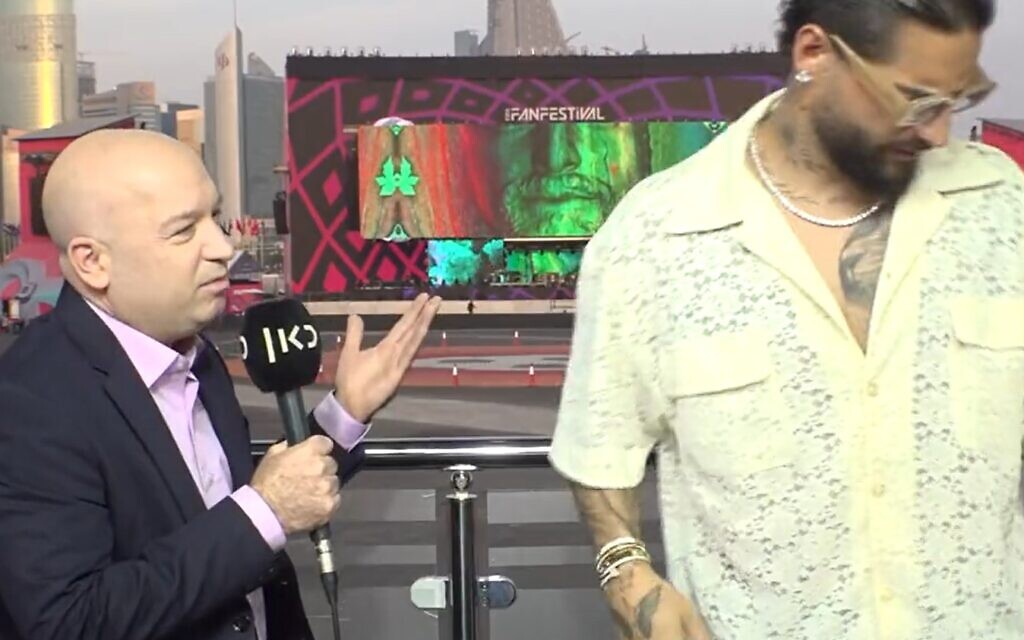 After being questioned about the issue of Qatar's human rights record during a live TV interview, one of the artists responsible for the song that will serve as the theme song for the 2022 World Cup abruptly ended the interview and left the studio.

Maluma, a Colombian singer-songwriter, abruptly left the set during an appearance on Israeli public television in Qatar and called Moav Vardi, the chief international correspondent for Israel's KAN News, "rude."

A video that has since gone viral shows that the singer was questioned about other celebrities, such as Shakira and Dua Lipa, who declined to be involved with the World Cup due to Qatar's dismal track record regarding human rights.

During the video, Vardi questioned:

Don't you have a problem with human rights violations in this country?

Yeah but it’s something I can’t resolve. I just came here to enjoy life, enjoy soccer and the party of soccer. It’s not something that I actually have to be involved with. I’m here enjoying my music and the beautiful life, playing soccer too.

After that, Vardi continued to press Maluma on the issue by asking him if he understood why some people might have a problem with the response he gave.

But can't you understand that people (are) gonna say, by the very presence of you here, you are helping whitewashing (the situation).

Do I have to answer that question?

Maluma said, looking off-screen. Then, someone heard in the background can be heard telling him no. "You’re rude,” Maluma told the reporter, then stood up and walked off the set.

Before Monday's games, a campaign to promote diversity and inclusion in soccer at the 2022 World Cup was stifled. Following FIFA's threat of yellow cards for players wearing "OneLove" armbands during the World Cup, the captains of England, Wales, Belgium, Denmark, Germany, the Netherlands, and Switzerland have been asked not to wear them.

We can't put our players in situations where they could face sporting sanctions such as bookings, so we've asked the captains not to try to wear the armbands in FIFA World Cup games.

It's yet another sign that FIFA is siding with Qatar, where LGBTQ people have been arrested and abused in detention, according to Human Rights Watch.

The federation banned alcohol sales at World Cup stadiums on Friday, a rule change seen as a way to appease Qatar, where public drinking is prohibited.

Maluma, a hip hop superstar Nicki Minaj, and Myriam Fares, a singer from Lebanon, collaborated on the most recent song to be added to the official soundtrack of the World Cup in Qatar.

The song "Tukoh Taka," which features lyrics in English, Spanish, and Arabic, was made available for purchase on Friday, two days before the beginning of the competition.

This track is the most recent addition to the official soundtrack of the 2022 FIFA World Cup, which features music from a variety of artists from all over the world.

Born and raised in Medelln, he developed an early interest in music and has been recording songs since the age of sixteen. Magia, his debut album, was released a year later in 2012.

His breakthrough album, Pretty Boy, Dirty Boy, was released in 2015, and it led to successful collaborations with a variety of artists. In 2018, he released F.A.M.E., another commercial success.

US chart. Maluma is one of the best-selling Latin music artists, having sold over 18 million records (albums and singles). Maluma's music has been described as reggaeton, Latin trap, and pop.

Maluma's singles "Felices los 4", "Borró Cassette," and "Corazón" have all charted in the top ten on Billboard Hot Latin Songs. His collaborations "Chantaje" with Shakira and "Medelln" with Madonna have both topped the Hot Latin Songs and Dance Club Songs charts.

In response to Maluma after being called rude, Vardi asks:

The singer, who has a girlfriend called Susana Gomez, is seen partying in the desert with Minaj and Fares in the World Cup anthem video.