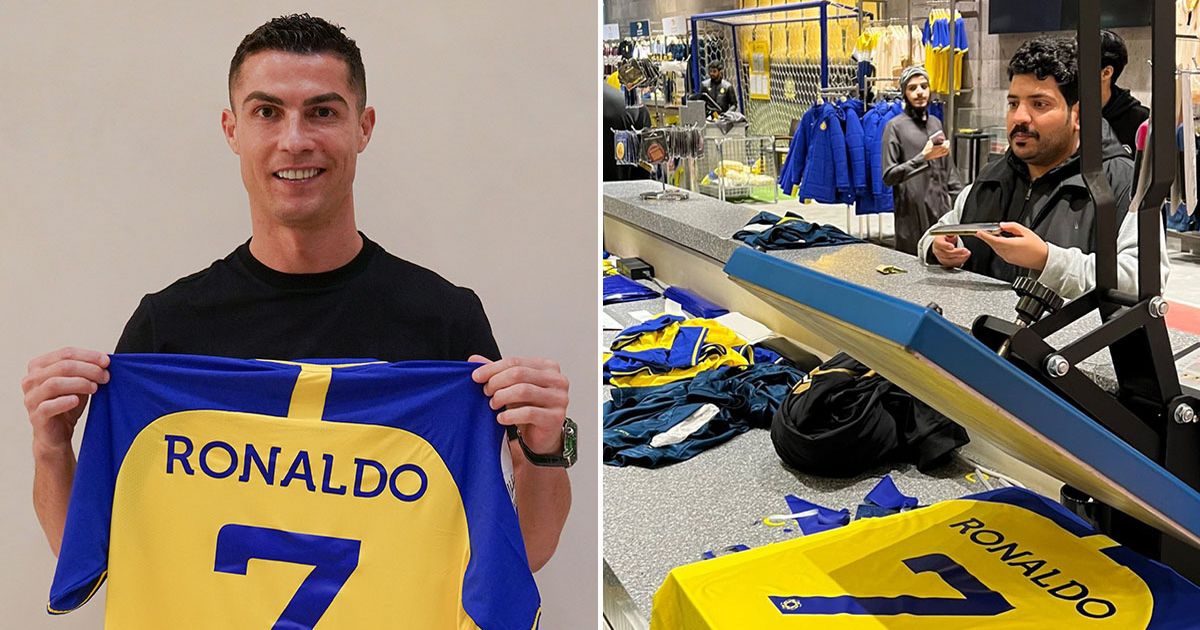 Abdulmohsen al-Ayyban, who is 41 years old, and his son Nayef, who is nine years old, were among those waiting in line on Saturday at the official kit store for the Al Nassr club, where employees were busy pressing Ronaldo's name onto t-shirts.

Al-Ayyban told AFP of the deal which he believes:

We are witnessing a historic moment, (the deal) will elevate the Saudi football league.

On Friday, Ronaldo became a member of the Al Nassr squad in a contract that will keep him there until June 2025 and is estimated to be worth more than 200 million euros. Nayef's grin was as wide as the sky as he lifted his brand-new jersey high in the air, beaming with pride.

A long-held goal of the young Saudi has finally been accomplished. He stated:

I have always wanted Al Nassr to acquire the best player in the world. I will make sure to watch all his games at the stadium.

An official from the Al Nassr club told AFP that Ronaldo, who is 37 years old, is expected to appear in front of fans the following Thursday. Ronaldo is the latest high-priced sporting jewel to be acquired by Saudi Arabia in an effort to add luster to their image on the international stage.

At home, the deal further fueled the national fervor that spiked after the kingdom defeated eventual winners Argentina in the early stages of the 2022 World Cup. This victory was hailed as one of the greatest upsets in the tournament's history, and it was one of the main reasons why the kingdom was so popular.

As soon as reports of the deal were leaked to the local press on Friday night, there was a rush like never before at the Al Nassr kit store. This was hours before the official announcement was made.

According to Abdulqader, the store manager, the lines of customers stretched all the way to the front of the establishment and have only gotten longer since then.

Customers are being asked to bring in their own T-shirts so that the player's name can be printed on them, which is a process that can take up to two days and has caused T-shirt stocks to nearly run out.

I have never seen anything like this in my life.

A jubilant atmosphere pervaded the retail establishment, where a large number of Saudi customers were joined by customers from Lebanon, Egypt, and China, all of whom hoped to purchase Ronaldo merchandise.

I have been a fan of Ronaldo since I was a child and now the Saudi club I support has bought him… my joy is doubled. I will be the first person attending his welcoming ceremony,

Rakan Mohammad, a university student who is currently 21 years old, shared in the excitement.

The deal confirms the value of the Al Nassr club. Enthusiasm and expectations are high.

The impact of the deal has already been felt, even before Ronaldo arrives in Saudi Arabia.

A significant number of Saudis voiced their approval of the action on social media.

The impact will continue to grow in the days to come.

Many Saudis have expressed their approval of the move on social media. In an Instagram post by a shop printing Ronaldo t-shirts in the colors of the Al Nasser team:

The dream has become a reality.

The comments started pouring in quickly, and many of them were from customers asking for shirts in their size.

one Saudi user on Twitter, captioning an image of Ronaldo holding up his Al Nasser jersey wrote:

A picture for the history books.

After a year in which he was demoted to the bench for Portugal and released by Manchester United, Ronaldo is moving on to greener pastures in the Gulf of Mexico.

Ronaldo was participating with Portugal in the World Cup when United decided to terminate his contract.