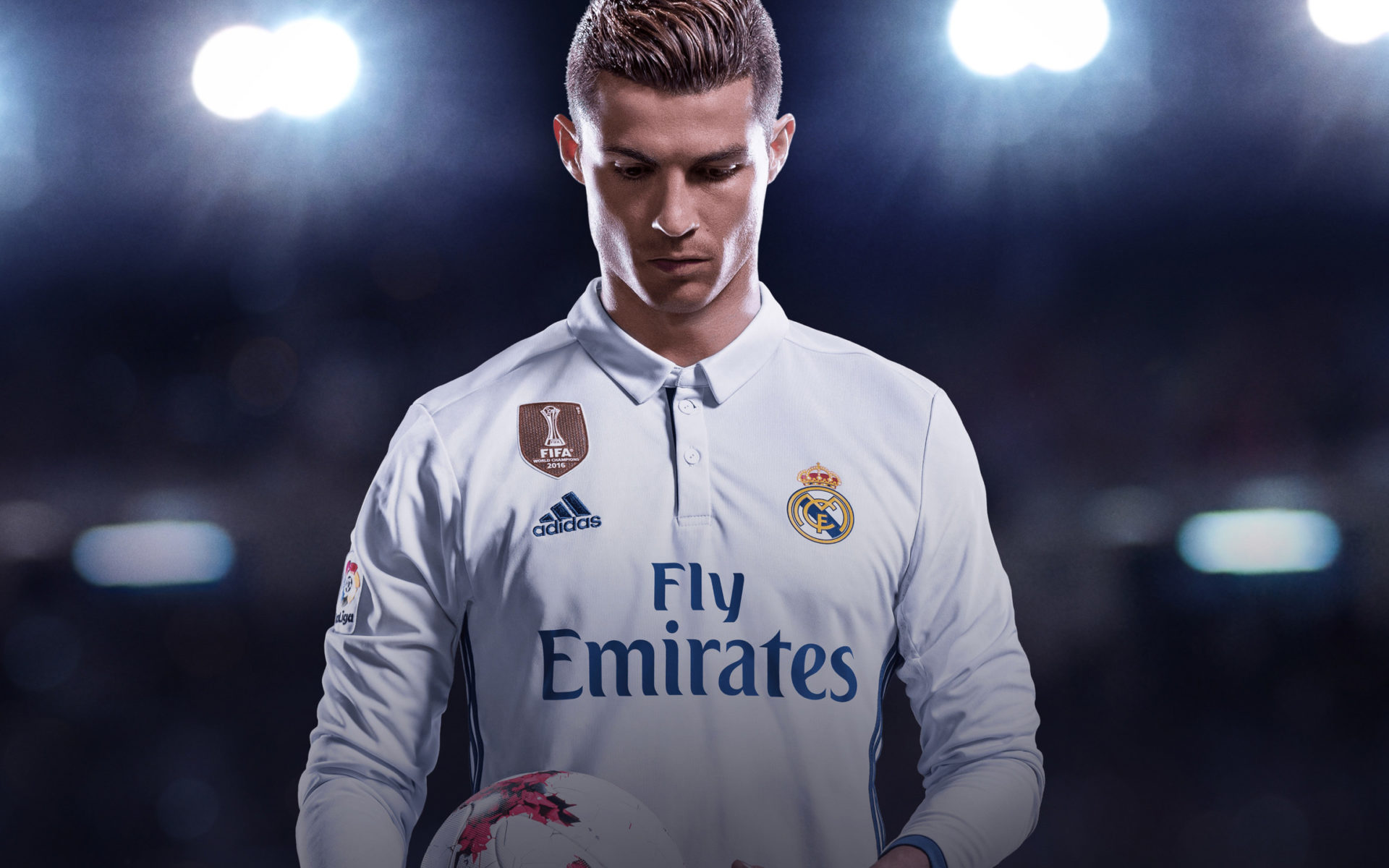 Cristiano Ronaldo, a Portuguese footballer, is widely regarded as one of the best players to have ever played the game, and his performances over the past decade have only served to strengthen that belief among football fans.

Ronaldo grew up in Madeira, Portugal, but after graduating from Sporting CP's youth system, he was immediately signed by Manchester United after their legendary manager Sir Alex Ferguson noticed his winger talent. Ronaldo spent six years at Manchester United, where he honed his skills as a skilled, fast, and lethal winger capable of scoring goals and creating chances for his teammates.

Before moving to Real Madrid as the world's most expensive player, he won numerous trophies for Manchester United and even shone for Portugal. He has smashed some of the most important goal-scoring records in Real Madrid's history, as well as leading the club to significant trophies.

Ronaldo also serves as the captain of the Portuguese national team, which won Euro 2016 for the first time in their history. He has also received numerous individual awards, confirming his status as one of the world's best footballers. 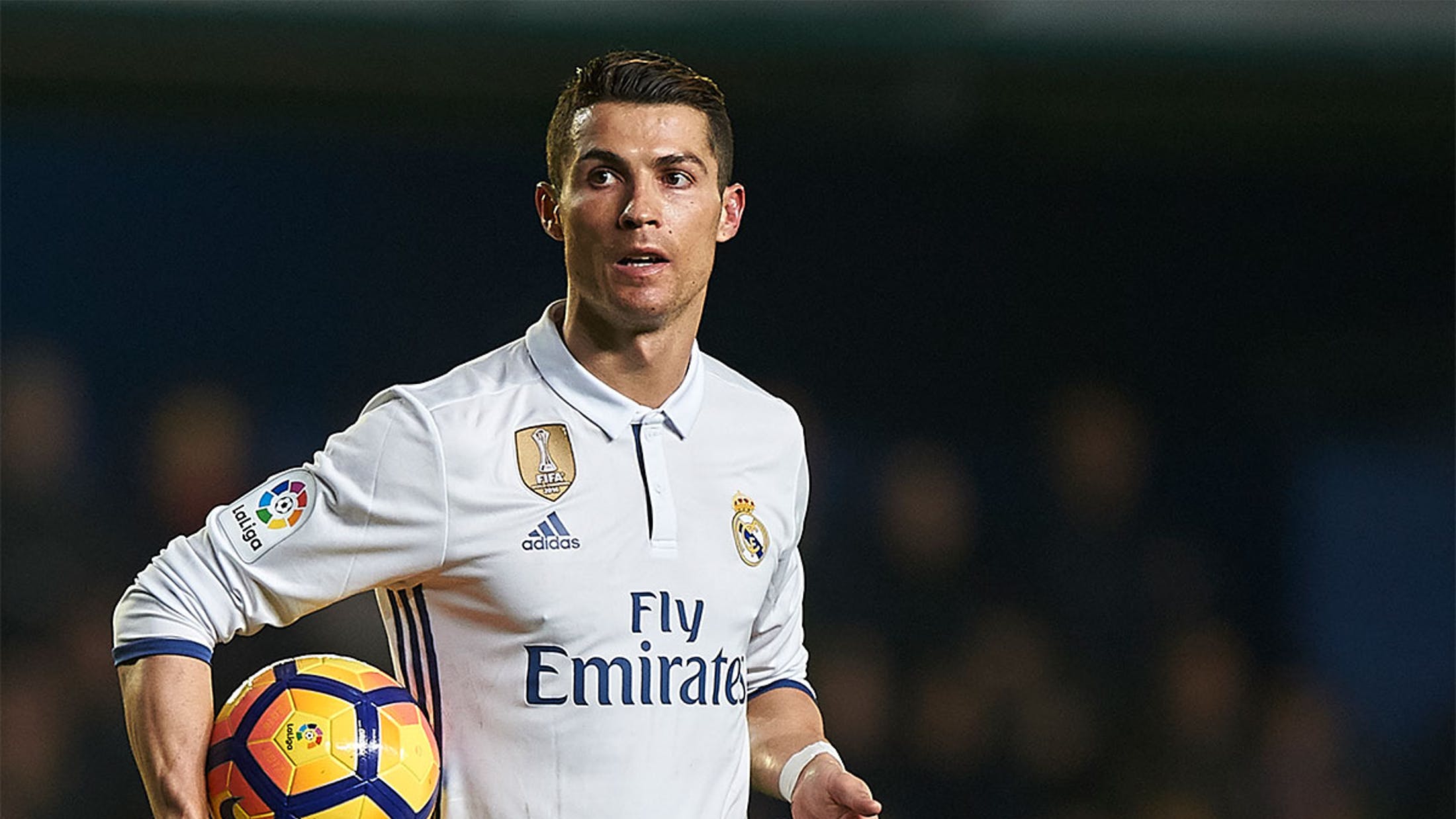 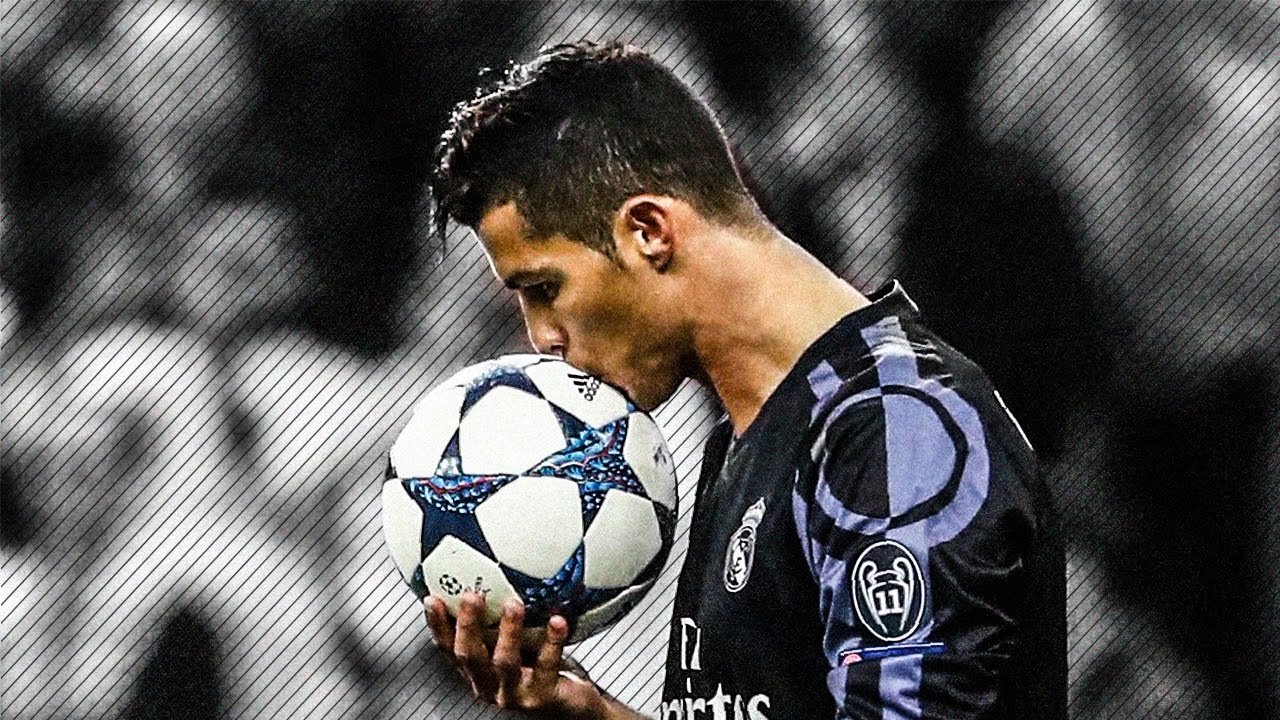 Cristiano Ronaldo was born in Madeira, Portugal, on February 5, 1985, to José Dinis Aveiro and Maria Dolores dos Santos Aveiro. His father worked for the city as a gardener, and his mother worked as a cook. Ronaldo was the youngest of four children, with two daughters and a son.

Ronaldo was expelled from school after throwing a chair at his teacher and assaulting him. He had always been a keen footballer, and by the age of 14, he had made the decision to pursue a career as a professional footballer. Since he was eight years old, Ronaldo had been a member of Androrinha.

Cristiano Ronaldo joined the club ‘Nacional' in his home town of Madeira in 1995, and after a successful season with them, he moved on to one of the biggest clubs in Portugal, ‘Sporting CP,' after passing a trial.

Known as one of the greatest footballers of all time, Cristiano has won his place among legends such as Pele, Maradona, and George Best. Also known as "CR7," he is frequently compared with Messi in a fiery debate about who is the best current player in the world. Cristiano Ronaldo is on track to earn more than $1 billion in his career from salary and endorsements, a record set by no other footballer. When he achieves that goal, he will join Floyd Mayweather ($1 billion), Michael Schumacher ($1 billion), Jack Nicklaus ($1.15 billion), Arnold Palmer ($1.35 billion), Tiger Woods ($1.65 billion), and Michael Jordan ($2+ billion) as members of the $1 billion athlete club.

Cristiano Ronaldo made his first appearance for Sporting Lisbon's first team at the age of 17, scoring twice in a 3-0 victory. Manchester United boss Alex Ferguson became adamant to sign the young player after Sporting defeated them 3-1 in 2003. At the start of the next season, Ronaldo joined Manchester United for a record-breaking fee for a teenager in English football. He made his Red Devils debut as a substitute in a 4-0 win, scoring his first goal with a free-kick.

Despite asking for a move in the 2006-2007 season, Ronaldo continued to play for Manchester United and changed his style of play. He scored over 20 goals and won the Premier League title during this season. The following season, he won the Champions League for the first time and set a new club record with 42 goals. For the 2008-2009 season, Ronaldo stayed at the club for another year.

Ronaldo subsequently joined Real Madrid, his boyhood club, for a record-breaking transfer fee at the time. He scored in each of his first four games for the club, setting another record.

He ended his debut season with Real Madrid with 33 goals. Next season, he became the first Real Madrid player to score more than 40 goals. He broke his own records the following year, scoring 60 goals in all competitions. He ended 2013 with 69 goals, winning the Ballon d'Or for the first time after more years of success. Ronaldo left Real Marid in 2018, having won several awards and breaking numerous records. 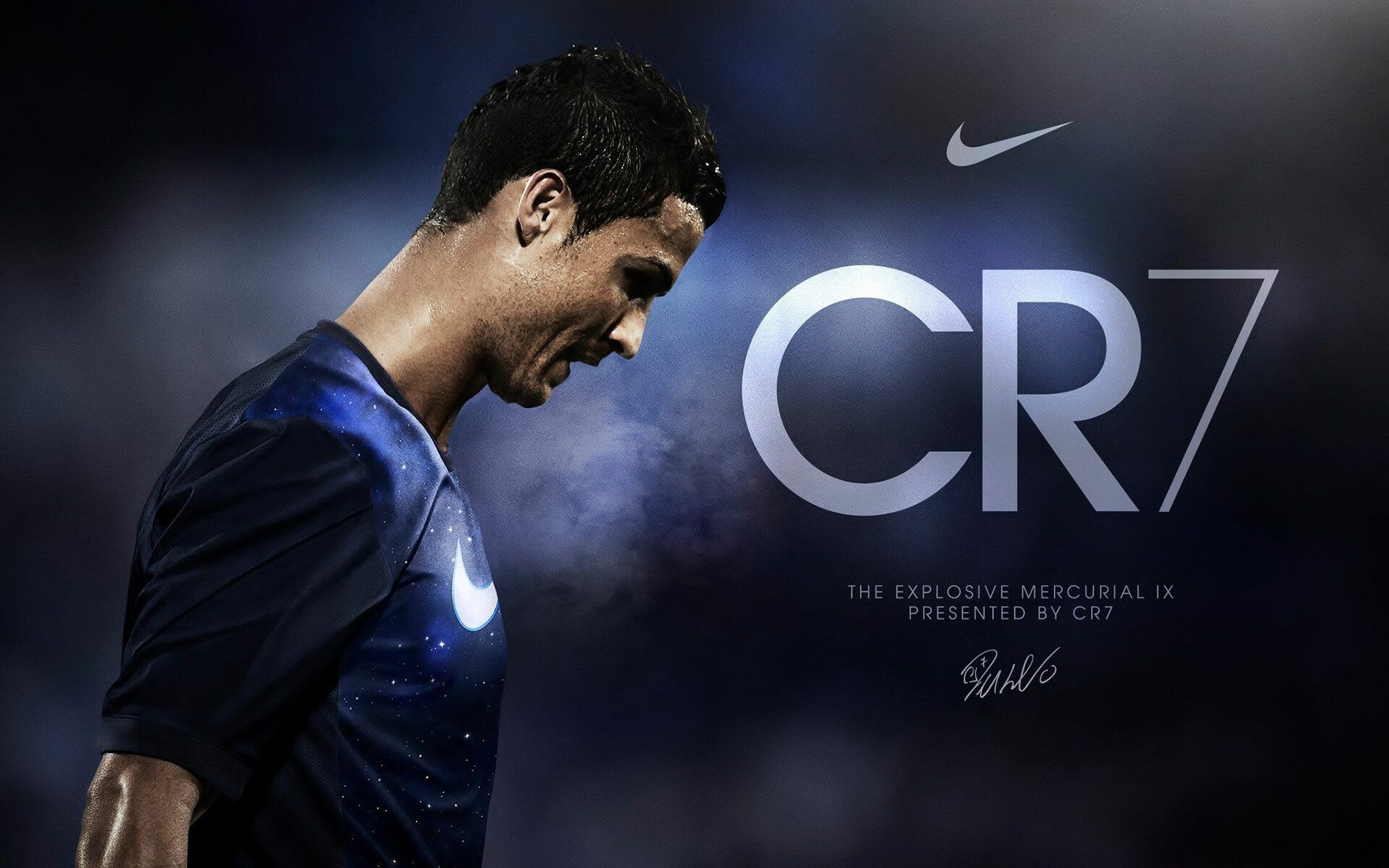 He then joined Juventus, finishing his debut season with 21 goals and 8 assists. In 2020, Cristiano Ronaldo began his second season at Juventus. Ronaldo has also had a successful international career, winning the Euro Cup in 2016 as a result of his efforts. Ronaldo has taken on a more leadership role in the Portuguese team, frequently displaying extraordinary levels of passion and commitment.

Cristiano Ronaldo played for Sporting CP at all levels, including under-16, under-17, under-18, the B-team, and the first team, before finally graduating to the senior team in 2002. He scored two goals in his league debut and announced his arrival on the big scene.

His exploits for Sporting CP brought him into prominence and some of the biggest clubs in England like Liverpool, Arsenal and Manchester United began courting him.

During Cristiano Ronaldo's six years at Manchester United, he became one of the club's most important players, and the club became one of Europe's most successful clubs, winning three league titles in a row and the UEFA Champions League in 2008. Ronaldo became one of the best players in the world after scoring 84 goals in 196 league games for the club.

Cristiano Ronaldo was a key member of the Portuguese national team during the 2006 World Cup, helping them reach the semifinals and scoring one goal. He was elected captain of the national team the following year, but he only scored one goal in the European Championships that followed, as the team crashed out in the quarter finals.

Cristiano Ronaldo became the world's most expensive player in 2009 after Real Madrid paid Manchester United £80 million to carry him to the Spanish capital. In his first season, he scored 33 goals. He scored 40 goals in the Spanish league the following season, a record in the league's history, and helped Real Madrid win the Copa del Rey.

Cristiano Ronaldo was the captain of Portugal at the 2010 FIFA World Cup in South Africa, but he had a quiet game, scoring just one goal as the team was eliminated in the round of 16 by Spain. In 2012, he was the team's key inspiration, scoring three goals to lead Portugal to the European Championships semifinals, where they were defeated by Spain in a penalty shootout.

The season that began in 2013 was especially memorable for Ronaldo, as he scored a total of 51 goals while also helping Real Madrid win the prestigious UEFA Champions League for the 10th time. Ronaldo scored 17 goals in the Champions League, making him the tournament's all-time leading scorer in a single season. In the competition as a whole, he has 89 goals.

Cristiano Ronaldo had a disappointing 2014 World Cup, as Portugal was knocked out in the first round and he only scored one goal. In his career, he has scored 50 goals for Portugal, the most by any Portuguese player. Ronaldo was in superb form in the league seasons that began that year, scoring 61 goals in total and becoming the fastest player in the Spanish league to cross the 200-goal mark. He got there in 178 games.

Cristiano Ronaldo began his career as a winger, using his speed and trickery to beat players in one-on-one situations and deliver crosses into the box. From a young age, he was also known for his shooting ability, particularly when it came to long-range strikes and free kicks.

Cristiano invented his own signature free kick strategy, which involved striking the ball through the middle to establish an unpredictable flight route.

Cristiano played as a typical central striker later in his career. Ronaldo's speed slowed as he got older, but he reinvented his game to be more of a "target poacher," finishing clinically inside the box. His ability to score from crosses, whether with soaring headers or stunning bicycle kicks, is particularly impressive. Cristiano Ronaldo's free-kick skills have deteriorated in recent years.

Cristiano Ronaldo is regarded as one of the greatest soccer players of all time. He has won the Ballon D'Or five times, the highest award given to an individual soccer player. He has earned the Golden Boot four times, which is awarded to the player with the most goals in all leagues. Ronaldo has earned more of both of these awards than any other European player.

By the year 2020, he will have scored over 700 goals for both club and country. He set records in both the Champions League and the Euro Cup, scoring 128 goals in the former and nine in the latter. At the age of 35, Ronaldo joined a select group of players who have appeared in over 1,000 matches and show no signs of slowing down.

A specialist in the field of flight. During his professional career, the striker has scored 107 goals with his head, including 65 for Real Madrid.

He is the all-time leading scorer for the Portuguese national team, having appeared in 147 games and scoring 79 goals.

It is difficult to score more than four goals in a single game. Only a few players may claim to have accomplished it. In two games, Cristiano has scored five goals. One is a match against Granada, while the other is a match versus Espanyol.

In all, Ronaldo has 27 goals in 18 games versus Sevilla, including all competitions.

Ronaldo has beaten Gorka Iraizoz the most times out of all the goalkeepers he has faced. The Basque goalkeeper has been faced 14 times and has given up 15 goals.

He shares the record for most Ballon d'Ors with Leo Messi. He has won five trophies in all, the latest two in a row.

Ronaldo has converted 77 of his 90 penalty kicks. 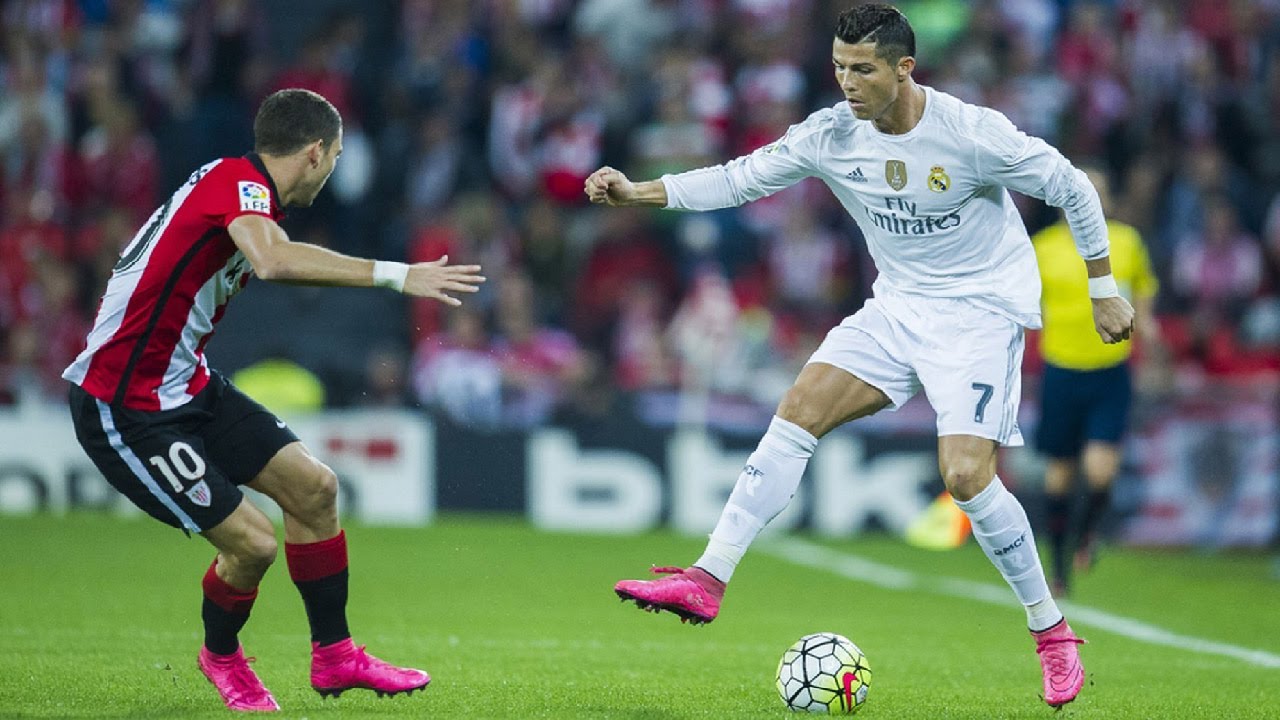 Ronaldo has scored 53 goals from direct free kicks, seven of which have been for Portugal. He has 33 goals for Real Madrid.

He made his national team debut against Kazakhstan when he was 17 years old. He's been a mainstay in the side since then.

His goals are scored with both his left and right feet and from any position. However, we might regard his good leg to be his right. He's scored 331 goals with it.

Cristiano Ronaldo has received six yellow cards in his career. The most recent occurred in the first leg of the Spanish Super Cup final.

In all competitions, his greatest scoring streak was 11 games in a row in 2013/14. He scored a total of 15 goals in those games.

Real Madrid defeated Rayo Vallecano 10-2 on December 20, 2015. It is Cristiano Ronaldo's biggest triumph as a member of a squad. He was responsible for two goals.

Cristiano Ronaldo set the Champions League scoring record with 17 goals in the 2013/14 season. His squad was crowned winners that year.

During his professional career, he has faced 128 different opponents, including matches with his national team.

In 2003, Manchester United paid £12 million for him, a world record sum for a player his age.

Ronaldo became the fourth footballer - following Steven Gerrard, Pelé, and David Beckham - to be portrayed as a waxwork at Madame Tussauds London in June 2010, during the build-up to the World Cup.

Cristiano Ronaldo is a lightning quick player. He recently won the zigzag spring challenge by half a minute over a Spanish sprinter, Angel David Rodriguez, while narrowly losing the straight line to a professional sprinter.

In a season, Ronaldo will sprint 900 times more than an Olympic sprinter.

On take-off, Ronaldo generates 5G of G-force, which is five times the power of a cheetah in full flight. This allows him to jump 44cm from a standing start and 78cm with a run-up, which is 7cm higher than the typical NBA player.

His free-kick speed is around 13.1 kilometers per hour, which is comparable to the speed of a space shuttle when it launches.

During a training session, Ronaldo lifts about 23,055 kg of weight, which is the equivalent of 16 Toyota Prius vehicles. The guy never ceases to surprise us.

Ronaldo was rated #1 on Forbes' list of the world's highest-paid athletes in May 2014, with earnings of $73 million from wages, bonuses, and off-field profits over the preceding 12 months.