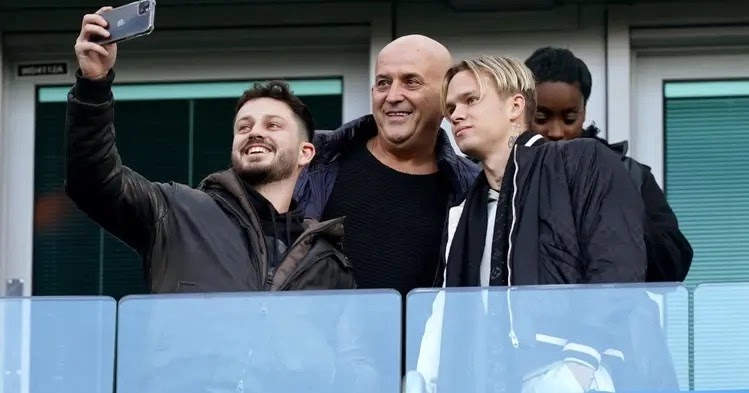 Mudryk, who played for Shakhtar this season and scored seven goals in 12 league appearances, was another player that Arsenal was interested in.

This is a huge club, in a fantastic league and it is a very attractive project for me at this stage of my career. I'm excited to meet my new team-mates and I'm looking forward to working and learning under Graham Potter and his staff.

Mudryk, who has played for Ukraine eight times since making his international debut in June 2022, was present at Stamford Bridge on Sunday to watch Chelsea's match against Crystal Palace in the Premier League. Chelsea faced Crystal Palace.

He is a young player with exciting quality in the final third. He is very fast and direct and I think the crowd will like him.

It appeared that he would sign with Arsenal, but on Saturday, the club president of Shakhtar, Rinat Akhmetov, met with the co-owner of Chelsea, Behdad Eghbali, to discuss a possible move to Chelsea.

I am convinced Mykhailo will win the respect, sympathy and love of all connoisseurs of world football with his speed, his technique, his bright and beautiful game.

After acquiring Joao Felix on loan from Atletico Madrid and making permanent deals with Benoit Badiashile, David Datro Fofana, and Andrey Santos, Chelsea has added Mudryk as their fifth new player since the start of the January transfer window.

Since a group of investors led by the American entrepreneur Todd Boehly took control of Chelsea Football Club in May 2022, the club's transfer spending has totaled more than £400 million.

Mykhailo Petrovych Mudryk is a professional footballer from Ukraine. He currently plays on the wing for Chelsea, which is a club in the Premier League, as well as for the Ukraine national team.

Mudryk began his professional career by playing for the youth teams of Metalist Kharkiv and Dnipro Dnipropetrovsk academies before joining Shakhtar Donetsk in 2016.

Two years later, he made his debut in the professional league, which was followed by loan stints with Arsenal Kyiv and Desna Chernihiv. He made the move to the English club Chelsea in 2023 for an initial transfer fee of 62 million pounds.

After having previously competed for Ukraine at multiple younger age levels, Mudryk made his senior national team debut in the year 2022.

Mudryk was born in Krasnohrad, Kharkiv Oblast, and raised there. As an Orthodox Christian, he frequently brings religious icons to matches and has openly discussed the importance of faith in his life. Mudryk has several tattoos, but the one that says "Only Jesus" is his favorite.

Both the club chairman Boehly and the co-controlling owner Behdad Eghbali expressed their happiness at Mykhailo's decision to join Chelsea, saying:

We are delighted to welcome Mykhailo to Chelsea. He's a hugely exciting talent who we believe will be a terrific addition to our squad both now and in the years to come. He will add further depth to our attack and we know he'll get a very warm welcome to London.